Roads of Kolar have been uprooted at many places 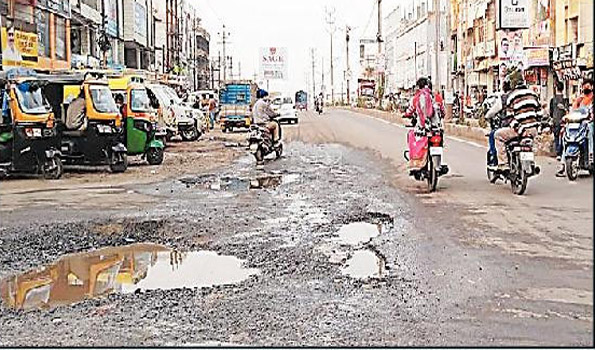 Chronicle Reporter, Bhopal
Potholes on the roads of the capital's Kolar area have become a cause of trouble for the drivers. Accidents can happen due to these potholes any time. After the rain, the roads in different areas of the city had deteriorated, repairs have been done at many places, but from Chuna Bhatti to Kajlikhelda on Kolar Road, the road has been uprooted.
Not even the patch work has been done on the roads, far from repair. At some places, the potholes on the road are also filled with water. This situation is also in other places including Chuna Bhatti, Sarvadharma, Bimakunj and Lalita Nagar.
These roads under PWD are in a dilapidated condition. Here during the rains, the pits get filled with water and in other seasons dust blows.
Excavated sewage lines and left incomplete
Several places were excavated for sewage lines in the area and were left unattended. There is soil lying all over the place. At the same time, there are potholes in the roads from Sarvadharma to Kajlikheda. Even the patch work was not done by the PWD. The construction of the Sarvadharma Pulia to Kajlikheda road in Kolar was prepared about four years ago at a cost of Rs four crores. The road was to be made by the PWD in four lanes, which included the construction of drains and pathways and corridors, drains were made in some places, but pathways were not constructed.
About three to four years ago the road was constructed at a cost of four crores, but the road was not built with quality and started crumbling after a year. The pathway was to be constructed by the construction agency as per the agreement, but was not done.
-Shyam Meena, Congress leader

Where excavations were done for the improvement of sewage lines, they were not re-improved. The condition of the road in Kolar Main Road and Ward No. 80 is dilapidated.
-BK Agrihotri,
Resident Kolar