Round of discussion on new role of Kailash Vijayvargiya 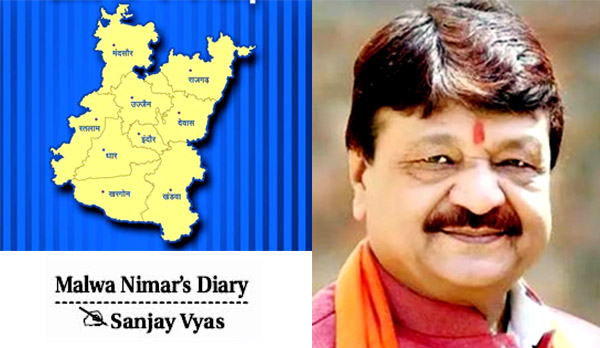 With the completion of the assembly elections in W Bengal, there has been a period of discussion on the new role of Kailash Vijayvargiya, the incharge of the place. The BJP could not win the election as per the target, but the party's ground in Bengal has become strong.

The entire credit goes to Kailash Vijayvargiya, a strong politician from Malwa-Nimar region. He was given the charge of Bengal, making him the party's national general secretary in 2015. At that time neither the organizational structure of the BJP was strong in the state, nor did it have a significant presence in the House. With the strength of the organization, Vijayvargiya brought the BJP's policy to the people in such a way that in the 2019 Lok Sabha elections, the lotus blossomed in 18 Lok Sabha seats of the state. It has also emerged as a strong opposition in the assembly elections.

Vijayvargiya's stature is set to increase on this achievement. Now everyone's eyes are on the BJP high command, what new responsibility they give to Vijayvargiya. Along with supporters, Vijayvargiya himself wishes to return home. At present, the central leadership does not want any tampering in the power organization of the state. It is definitely that with the death of MP Nand Kumar Chauhan, the vacant Khandwa seat should be given to Vijayvargiya giving him a chance to reach the Lok Sabha with the by-election to be held in a few months. It remains to be seen whether the central parity organization ensures his return to Madhya Pradesh or he retains the charge of Bengal to make the party more powerful for the 2024 Lok Sabha elections in that state.

Exercise to save the chair on a pile of corpses

The surge in the figure of deaths in Nimar at the time of Corona is not hidden from anyone. Here people also died a lot and stickers of pneumonia were pasted on their dead bodies and given to the family. If influential people die, then only the deaths were acknowledged as due to Corona. The question arises that when there is not so much corona, then why did these bodies come out of the Covid-19 center? Why were they admitted to the coronavirus ward for a long time despite having pneumonia? It was amazing in Khandwa.

The medical college of Nimar is here. Here, both the district administration and the hospital administration admitted there was big shortage of oxygen and remdesivir injection and the patients suffer even today. But they keep telling the government that everything is right. Circumstances are critical.

People are unable to tell the pain of losing their loved ones to anyone. The administration of Khandwa even tried to silence the media. Notices were also handed over to journalists of several big houses. It must have been done at the behest of a big leader. Will they be able to shine their politics in future in such circumstances by making the media angry? The officers of the administration keep changing, but the leaders have to do politics till the last breath. This matter has reached the Chief Minister. Now efforts are being made to mend it.

Bhilanchal lost two loyal volunteers Lunchand Parmar and Jayantilal Maru who had been campaigning for years against conversion. These two senior cadres of the Sangh worked in adverse circumstances while there was a rule of Congress party at the Center and the state and the missionaries and conversions dominated.

At that time, the two RSS functionaries went from house to house and rural areas, and strengthened the Sangh's roots in Petlavad and Jhabua. Saplings planted by them are presently giving shade in the form of Vatavriksha in the entire area. In this way, when there were adverse conditions in the entire region, at that time both of them left their work and used to participate in the camps of the Sangh and used to give their services in the camps with body, mind and money. The sudden demise of these two senior workers and volunteers of the Sangh happened due to Corona. The death of both of them is a setback to the movement being run against the conversion of the Sangh.