Rs 50 lakh cr to be invested in Railways in 12 years: Goyal 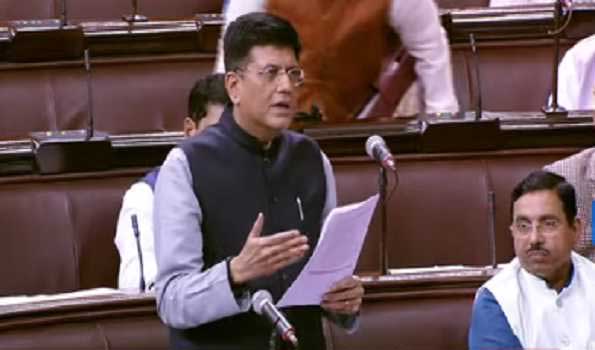 New Delhi, Assuring that Railways would never be privatised, Railway Minister Piyush Goyal on Tuesday said the government will invest Rs 50 lakh crore in Railways, in the next 12 years.In his reply on 'Discussion on the working of Ministry of Railways,' Mr Goyal said, 'There is no priority to privatise the railways... It's our commitment to make Indian Railways as World no 1.'He also said the trains would be cent per cent Open Defecation Free (ODF) soon, as bio-toilets in 99.5 per cent of rail coaches are installed. Rest will be completed soon, the Minister added.Replying to the members' remarks about cleanliness in train coaches, Mr Goyal said the Railway Ministry had got the 'Best Performing Ministry' award in 2019.He said the Centre plans to make the Indian Railways the first rail network in the world, which is 100 per cent electrified with solar energy.The Ministry has planned to set up solar power grids with a capacity of 20,000 MW to power this project, Mr Goyal added.During his reply, the Minister referred to a project in West Bengal that started in 1974, but is still incomplete.

He also sought the state government's cooperation for early completion of railway projects, which were pending since long.Mr Goyal said, 'If the state governments are willing to work with the Central government and provide land in their respective states, we (the Centre) will make efforts to fast track all such incomplete projects.'Leader of the Opposition Ghulam Nabi Aazad asked about the status of Udhampur and Baramula rail lines, which were started during the UPA regime.The Minister said the project got delayed due to a PIL, filed against the Railways. 'The decision came in our favour. Then, the petitioner moved the Supreme Court.'He also assured Mr Azad that the project will be completed before August, 2022.

Mr Goyal further informed the Upper House that the government is going to construct a bridge on Chenab river, which would be highest in the world.Further, he added that as a tribute to the 'official unifier of India' Sardar Vallabhbhai Patel, the Centre also planned to integrate the Sardar Vallabhbhai Patel statue in Gujarat, into the Railways network.Calling Railways an engine of growth for the country and a means of national integration, Mr Goyal said the impetus that Railways has received since the past five years, was unprecedented.