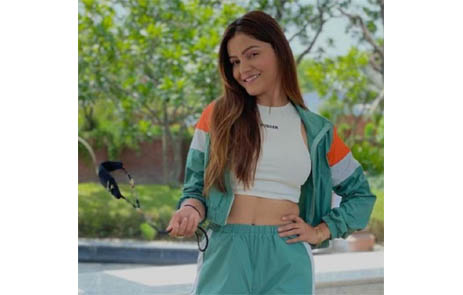 Rubina Dilaik’s latest pictures have left fans impressed as she glows and also looks healthy and fit.
Actress Rubina Dilaik is doing well after she was tested positive for COVID 19. She is a known fitness enthusiastic and her healthy habits helped her in fighting the deadly disease. She had revealed her routine during the COVID time and left her fans inspired. Post her recovery, she has been sharing a lot of pictures of herself. In the latest, she has shared a series of pictures that have left her fans in awe. She is full of swag in a sporty co-ord set.
Taking to her official Instagram handle, she captioned the pictures as, "Eagerly waiting for those days, when I‘ll fly away the masks, but until then won’t shy away from wearing the masks". Fans are impressed with her look and are also surprised how quickly she has bounced back. They are also amazed with her natural glow. The actress has opted for neutral makeup.
Popularly called as a boss lady, the actress' pictures received a lot of love from fans. They wrote, ‘Watching you smiling warms our hearts’.
Recently, she had shared a video where she mentioned that she is missing her husband Abhinav Shukla very much and wants to hug him. He is in Cape Town, South Africa and is busy shooting for Khatron Ke Khiladi 11. The couple will also be missing their wedding anniversary as both will not be together this year. The actress is in India shooting for her show Shakti Astitva Ke Ehsaas Ki.