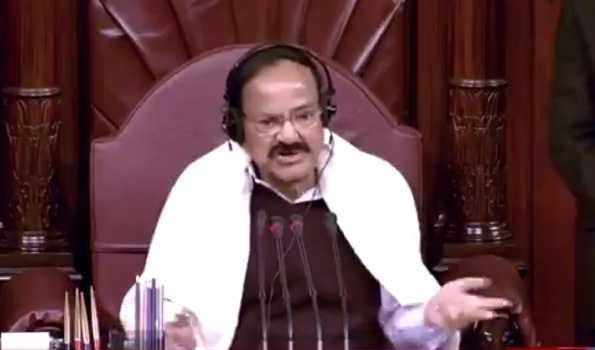 New Delhi, The Rajya Sabha proceedings were adjourned for the day on Friday following continuous disruptions by the Opposition pressing for immediate discussion on the recent Delhi violence.This is the fifth day in row when the Upper House could not transact any business due to the Opposition uproar. The Opposition has upped the ante despite the Government's assurance of holding a debate after the festival of Holi. Soon after laying the papers, Chairman M Venkaiah Naidu initiated the Zero Hour when the Members from Opposition Bench stood on their seats raising slogans in support of their demand.
As Mr Naidu asked BJP Member Kailash Soni to speak, the Members from Opposition including Congress, BSP and All India Trinamool Congress (AITC), rushed into the Well raising slogans before the Chair. The Chair asked the agitating Members to resume their seats, failing which, he said, he will be forced to name them. The warning went unheeded and Mr Naidu had to adjourn the House till 1100 hrs on Wednesday.