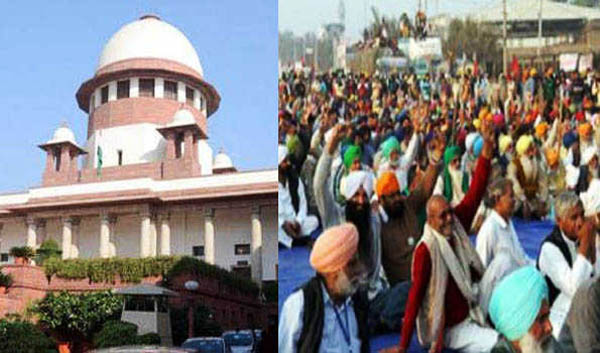 New Delhi,  (UNI) The first meeting of the Committee, appointed by the Supreme Court to deliberate with concerned stakeholders on the recently-notified three Farm Laws, was held on Tuesday.

The Supreme Court had, on January 12, suspended the implementation of three farm laws until further orders and constituted the four-member committee, to understand the ground situation and get a clear picture about the laws.

The committee discussed the road map of activities for the Committee for two months to prepare their recommendations after discussion with farmers, farmers' bodies, farmers' unions and other stakeholders.

Addressing the media, Mr Ghanwat said as per the direction of the Supreme Court, the Committee will hold discussion with farmers and farmers' bodies in the country, who are both pro and against the Farm Laws.

It will also hold discussions with State Governments, State Marketing Boards and other stakeholders, such as Farmer Producer Organisations, and Cooperatives.

The Committee will soon send invitations to the farmer unions and associations, to discuss their views on Farm Laws. Even individual farmer can submit his/her views on the portal, to be notified soon, he added.

Mr Ghanwat said the Committee was keen to understand the opinion on the subject of all concerned, so that it could give suggestions, which would definitely be in the interest of farmers of India.

Talking to the media after the meeting, Mr Joshi said they will approach the farmer unions to know their views on these three agriculture Bills on January 21.

The tenth round of talks between the Centre and the agitating farmers to end the logjam over the three farm laws, which was to be held on Tuesday, will now be held on January 20.

According to sources close to Union Agriculture Minister Narendra Singh Tomar, the meeting will now take place on January 20.

The farmers' protest over the three farm laws entered the 55th day on Tuesday, as the protestors continued their stir at various entry points of the National Capital region.

The All India Kisan Sangharsh Coordination Committee (AIKSCC) on Monday had asserted repealing of three Acts and the Electricity (Amendment) Bill, 2020 (EB 2020) as the only agenda, to begin the meaningful dialogue.

The ninth round of talks between the Centre and the striking farmer unions on January 15 failed to resolve the deadlock over the three farm laws.
Meanwhile, Mr Tomar on Monday had said that the Government has boldly enacted new agricultural reform laws.

Addressing a national conference on agricultural reforms, the Union Agriculture Minister said the reforms will prove very helpful for the farmers and they will raise their standard of living.