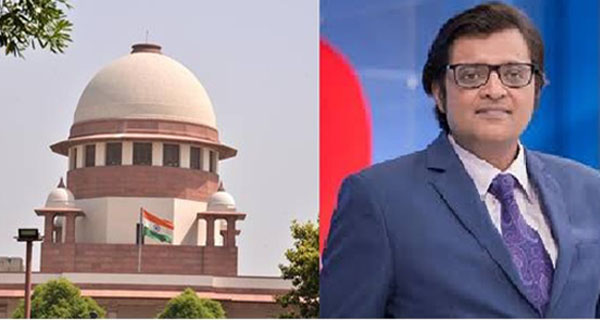 The Supreme Court, on Friday, granted a three-week protection to Republic TV anchor and Editor-in-Chief Arnab Goswami in connection with multiple FIRs filed against him for his alleged defamatory remarks against Congress chief Sonia Gandhi in one of his shows.

An Apex Court bench comprising Justices D Y Chandrachud and M R Shah gave Goswami protection from any coercive action for a period of three weeks after which he can file an file anticipatory bail plea in connection with the FIRs.

The Bench stayed all FIRs - except the one registered at Sadar Police Station, Nagpur - against the journalist.

The Top Court, in its interim order, also transferred the FIR registered at Police station, Sadar, Nagpur against Mr Goswami to NM Joshi Marg in Mumbai and it will be investigated along with the FIR lodged by him with regard to physical attack on him two day ago.

Mr Goswami had, on late Thursday, approached the Top Court seeking quashing of FIRs lodged against him.

During a live debate on Tuesday on TV channel Republic TV, the journalist allegedly tried to defame Ms Gandhi by questioning her silence on Palghar issue and making remarks on her country of origin Italy.

The Republic TV Editor, in his petition, had claimed that the complaints and the FIRs are false, vindictive, frivolous, malicious, precipitated with malice,

untenable in law and have been filed with mala-fide intent by the Congress activists to coerce, harass and intimidate the petitioner in order to muzzle the media and in particular the petitioner, from carrying these news reports and conducting investigative journalism to bring the truth before the public.

However, senior advocate Kapil Sibal, appearing for the State of Maharashtra, termed the petition as based on "fake freedom of speech".