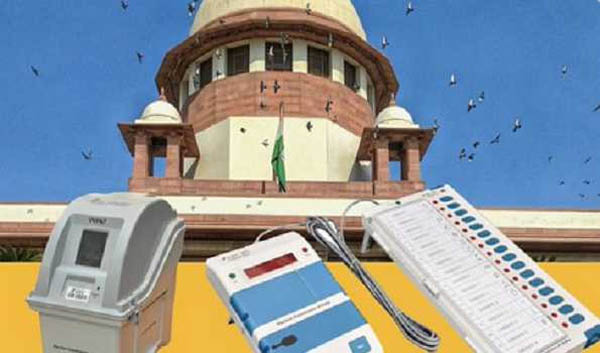 New Delhi, Apr 19 (UNI) The Supreme Court on Monday nixed a Public Interest Litigation (PIL) seeking 100 per cent matching of Voter Verifiable Paper Audit (VVPAT) trail with EVM vote count to ensure transparency in election results in the ongoing Assembly polls.
A three-judge Bench of Chief Justice of India SA Bobde and Justices AS Bopanna and V Ramasubhramaniam was hearing the plea of All India Trinamool Congress leader from Bongaon, Gopal Seth.
Advocate Pijush K Roy, appearing for the petitioner, said free and fair election was a right of citizens.
When CJI asked Roy, whether or not a representation was made to the Election Commission of India in this regard, he replied in affirmative.
Dismissing the PIL, the Top Court said that the bench agrees with the petitioner that "free and fair election" is a right of the citizens, but will not interfere in the middle of the polls.
In 2019, the Supreme Court had dismissed plea seeking 50 per cent random physical verification of vote count shown by Electronic Voting Machines with VVPAT trail.