SRK's son Aryan to remain in jail till Oct 20 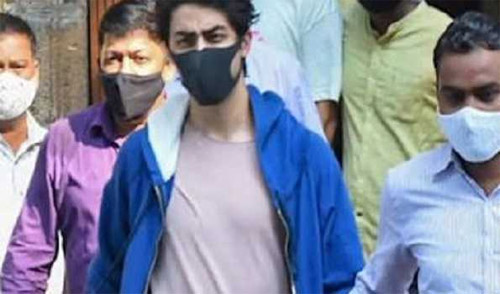 Mumbai Oct 14 (UNI) A Special Court in Mumbai on Thursday reserved its order on a bail plea moved by cruise drug bust case accused Aryan Khan and others till October 20 after two days of back to back hearing.

Aryan will remain in normal barracks along with other undertrials at the Arthur Road Jail in connection with the alleged seizure of banned drugs from a cruise ship off the Mumbai coast on October 2/3.

Aryan was moved from the quarantine centre inside the jail premises to normal barracks earlier in the day just ahead of the hearing resumed.

The prosecution opposed the plea on the grounds that though no drug was sized from Aryan but he was in touch with the peddler and he himself is an addict.

The defence urged the court to grant bail to the 23-year-old as no drug was found from his possession when he was arrested during the raid on October 2. The defence also said the investigation in the case is over hence he should get bail.

Aryan, Munmun Dhamecha and Arbaaz Merchant were arrested by the Narcotics Control Bureau on October 3 following the raid on a Goa-bound ship, while the another five were arrested the next day. All accused are in judicial custody.