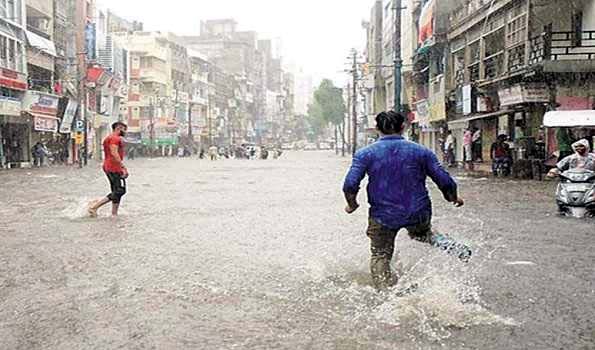 According to the IMD officials, advancement of southwest monsoon into remaining parts of Rajasthan, west Uttar Pradesh, Haryana, Chandigarh and Delhi and Punjab is likely to be slow as large scale features are not favourable and the forecast wind pattern by the numerical models do not indicate any favourable condition for sustained rainfall over the region during the forecast period.

The national weather bureau also said that a cyclonic circulation in lower and mid tropospheric levels lies over southwest Rajasthan tilting southwestwards with height and also an offshore trough runs from south Maharashtra to north Kerala coast and under the influence of these systems, a fairly widespread to widespread rainfall with isolated heavy to very heavy falls very likely over Konkan, Goa, Gujarat State, Coastal and South Interior Karnataka and Madhya Maharashtra during next two days.

“A moderate to severe thunderstorms accompanied by frequent cloud to ground lightning very likely to occur over Uttarakhand, Uttar Pradesh, Madhya Pradesh, Bihar and Jharkhand on June 19-20. This may cause injuries leading to casualties to people and animals staying outdoors”, the IMD added.