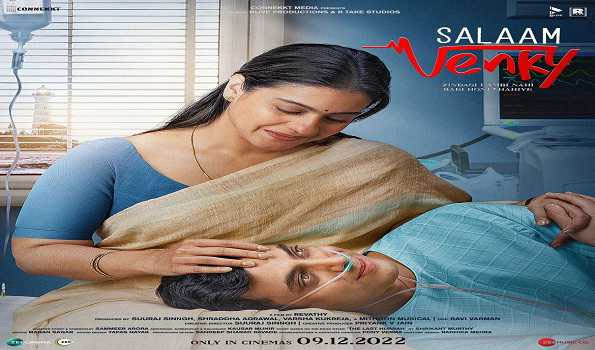 Kajol’s effervescent screen presence is all set to beguile the audience once again, and to add on to is Vishal Jethwa who is all set to showcase his amazing acting prowess after gaining much love and appreciation for ‘Mardaani 2’.

‘Salaam Venky’ stars Jethwa as Venkatesh, whose health is deteriorating quickly, yet he is prepared to fight for every moment of happiness, very much like his mother.

Talking about his preparation and what helped him to get into the skin of the character the actor said in a statement, “Ever since I have started my journey as an actor, I have understood that I am my director's actor, I always try to figure on set what my director is expecting from me and I try to deliver it."

"To get into Venkatesh character I saw several videos of DMD patients as its a rare disease and not many are aware about it. I saw many videos to study how the patient behaves, how they talk, their body language, their entire day routine. Untill which age what body part supports them etc. So I tried to understand and get the information and give my best to perform the character realistically," he added.

Presented by Connekkt Media and produced by Suuraj Sinngh, Shraddha Agrawal, and Varsha Kukreja under the banner BLIVE Productions and RTAKE Studios, ‘Salaam Venky’ is directed by Revathy and is set to release in cinemas on December 9.