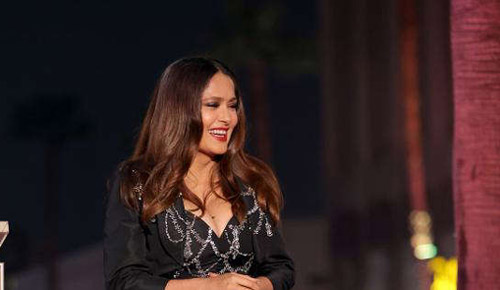 Salma Hayek's name is being firmly carved in Hollywood history after her outstanding career. During a special live-streamed nighttime event on Friday, the "Eternals" star was honoured with a star on The Hollywood Walk of Fame. Actor and "Grown Ups" co-star Adam Sandler, as well as Academy Award-winning filmmaker Chloé Zhao, spoke at the event.
As per Today, Mayor Eric Garcetti of Los Angeles, Oscar-winning filmmaker Chloé Zhao, and comedian Adam Sandler all provided heartfelt greetings to the "Eternals" star, praising both her on-screen and off-screen achievements. However, when Hayek entered the stage, she said how "healing" the Friday night event was for her. She shared a tale of being assaulted two years after migrating to the United States from Mexico in the early 1990s. Hayek said that several of her friends had come to Los Angeles and want to explore Hollywood. Hayek recalled ignoring a "poor man who was on the floor and was very messed up" who catcalled her while they were there.
“And I kept walking and he took offense. (He) got up, took a knife out and started coming after us. Especially after me, trying to stab me,” she said. "Nobody helped us," she added, as they ran away and into a store. Hayek said they jumped over the counter in the store and grabbed a “stick” for protection, before being forced to wrestle the man. However, she described multiple incidents of racism she encountered in the United States at the time, including someone kicking her in the seat of a movie theatre and asking her to "go back to your country."
Salma, in the end of her speech expressed gratitude to her fans and dedicated her star to them. The actor said, "I want to say to everybody that’s here, all my lovely fans: If you ask yourself what gave me the courage to stay, I say it was you because although they didn’t know me, here in Hollywood, the studios, all the Latins that are in the United States knew who I was. They understood that I came here with dreams like they did.”
Meanwhile, Hayek, who is from Coatzacoalcos, Mexico, began her career as an actress in Mexican telenovelas. "Wild Wild West," "Grown Ups," and the forthcoming "House of Gucci" are just a few of the films and TV programmes in which she has appeared. Hayek also appeared in and produced "Frida," a biopic about legendary Mexican artist Frida Kahlo, which was widely praised.