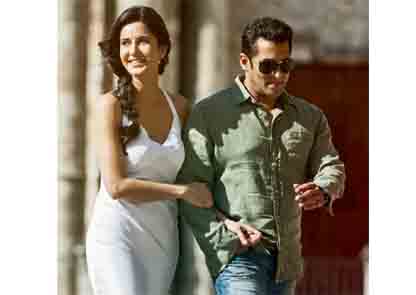 After a hectic, month-long schedule last month, traveling across three countries, while Katrina will begin her shoot from tomorrow, Salman Khan, will report back to action at Yash Raj Studios, from Wednesday. The actor had landed in Mumbai on September 26, headed for the Bigg Boss 15 shoot, after a day’s rest and then shot some dialogue sequences for his home production, Antim: The Final Truth last week.
Says a trade source, “Salman has been like a whirlwind completing his shoots in record time. This is a completely new and dynamic actor who is raring to go and in action mode. He has already shot for two of his projects and from day after, begins shooting for Tiger 3 again at YRF Studios. Tomorrow is Day 1 shoot of the movie’s new schedule after the international one. Salman, Katrina and Danish Bhatt will be shooting an action sequence with an international stunts team from Cape Town (South Africa) which is designing them. Some high-octane aerial stunts will also be shot during this schedule and enhanced by VFX later. While Katrina resumes shooting from October 12, Salman will begin shooting from 7 am from October 13 and then both the actors carry on from where they left off in their last schedule. Both Katrina and Salman were spotted at YRF last week checking out the action and rehearsing for some scenes.”
After a hectic schedule in Russia, Turkey and Austria, Salman Khan returned to Mumbai on September 26. Katrina and Emraan returned a couple of days later after shooting some dramatic scenes in Austria. The actors shot for high-octane action sequences and dramatic dialogues while two songs were picturised on Salman and Katrina in Turkey and Austria. The movie’s antagonist, Emraan Hashmi, was present during some of the action sequences including the track in Austria. Vaibhavi Merchant choreographed two romantic tracks on Salman and Katrina and the action sequences in Turkey and Russia were designed by South African stunt coordinator, Franz Spilhaus.
The source adds, “Producer Aditya Chopra and Maneesh have envisioned a lavish scale for Tiger 3 in every department – from action, drama, beautiful, grand, never-seen-before locales and cinematography to music (Pritam) and choreography. Audiences who watch the third franchise of the Tiger series where Katrina and Emraan fly back to Mumbai with the rest of the cast and crew. They have completed two songs (both composed by Vaibhavi Merchant) in this entire foreign schedule, apart from action and dramatic sequences. Emraan plays the antagonist in Tiger 3 and it’s a cool, stylish character. He joined Salman and Katrina in Vienna where he shot some exciting action sequences with them. Finally, Emraan and Katrina wrapped up the international schedule at Berndorf, Austria. Tiger 3 has been planned on a grander scale with a huge budget, by producer Aditya Chopra and director Maneesh Sharma. The story demands intelligence agents Avinash Singh Rathod aka Tiger (Salman) and Zoya Humaini (Katrina) to hop from one country to another, chasing the antagonist.”