Sanjay Dutt and Shilpa Shetty Kundra set the stage on fire by grooving on their famous song, ‘Aila Re’ on Super Dancer Chapter 4 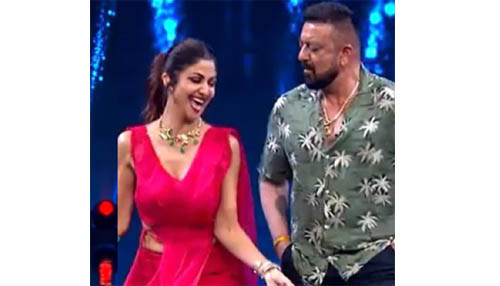 Super Dancer – Chapter 4 will be seen celebrating the, ‘Ganpati special’ episode with none other than actor Sanjay Dutt, this weekend. All the contestants will present some outstanding acts on some of Sanjay Dutt’s chartbuster songs.
But, the cherry on the cake will be when Sanjay Dutt and judge Shilpa Shetty Kundra set the stage on fire by performing on their super-duper hit song, ‘Aila Re.’ The duo amaze everyone with their moves so much that everyone present on the set including judges Geeta Kapur and Anurag Basu join them and dance together.
Later, on dancing with Sanjay Dutt, judge Shilpa Shetty Kundra said, “Dekho doosre heroes ko naachna padhta hai, magar Sanju jab chalte hain na ussi mein saara entertainment hai.”
Also, this weekend marks the announcement of Super 10 contestants who will go ahead as the competition progresses. Who from amongst the 13 contestants will be a part of Super 10?