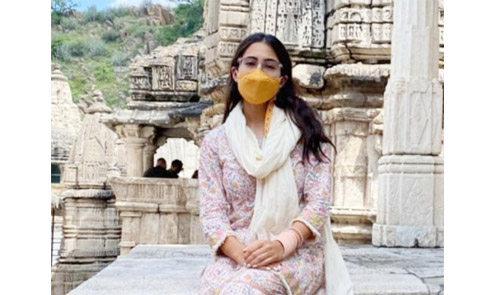 Actress Sara Ali Khan is among the stylish stars in Bollywood and every time she steps out, the star makes heads turn. Now, with her new photos from Udaipur, Rajasthan, Sara has once again proved that she can slay in anything. The gorgeous star seems to be on a Udaipur escapade as she shared two photos while visiting holy places in the land of the lakes on Monday. While Sara didn't reveal much with her photos, the Starkid certainly gave all a glimpse of her ethnic look of the day.
Taking to her Instagram handle, Sara shared two photos. In the first photo, Sara is seen clad in a vibrant floral kurta with sharara and a dupatta. The Atrangi Re actress is seen offering praying at the Neemach Mata Temple in the Udaipur district. In another photo, Sara is seen sitting inside another Temple premises. Sara seemed to have visited the Shri Ekling Ji Temple where she prayed and later, sat outside to pose for the camera. She is seen wearing a peach mask and spectacles as she poses for a photo.
The gorgeous star recently was in the headlines when she praised her best friend Radhika Madan after watching her film Shiddat starring Sunny Kaushal. Sara and Radhika had gone on a trip to Ladakh together with Jasleen Royal and their photos had gone viral on social media.
On the work front, Sara will be seen next in Atrangi Re with Akshay Kumar and Dhanush. The dubbing for the film is going on currently and Sara has shared photos from the sessions in the past. The film is helmed by Aanand L Rai and backed by him and Bhushan Kumar. Reportedly, the film will premiere on Netflix.