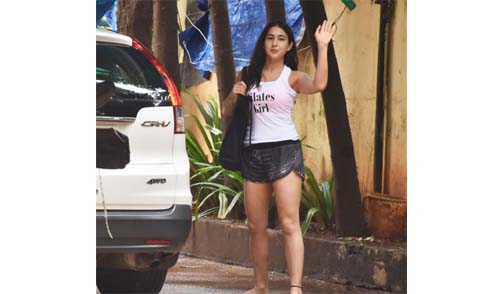 Actress Sara Ali Khan is among the starlets who never skip their workout routines if they are in town. Be it extreme heat or rain, Sara is among the stars who will head to workout under any circumstances. Speaking of this, on Tuesday afternoon, Sara was snapped at her pilates centre as she headed to sweat it out. The Simmba star kept it casual for her workout. However, her tee gave a glimpse of her 'pilates' love to her fans.
In the photos, Sara is seen closing the door to her car as the paparazzi caught her in the frame. She stopped what she was doing and stepped ahead to pose for photos. Sara is seen clad in a white tank top with grey shorts with flats. Her tee had a caption, 'Pilates girl' on it. Sara left her hair open and was seen carrying a tote bag in one arm. As she waved to the paparazzi, Sara was caught in the frame. Her casual gym look seemed apt for her workout session.
Meanwhile, recently, a video that Sara shared on her Instagram handle on World Emoji Day went viral on social media. In the video, Sara took up the challenge to show off several emotions in short time duration. Her cute video managed to leave netizens impressed.
On the work front, Sara will be seen next in Atrangi Re with Akshay Kumar and Dhanush. The film is helmed by Aanand L Rai and produced by Bhushan Kumar. The release date is yet to be revealed by the makers. Besides this, reportedly, Sara may star in another production titled Nakhrewali by Aanand L Rai. Reportedly, Sara is also a part of The Immortal Ashwatthama with Vicky Kaushal.