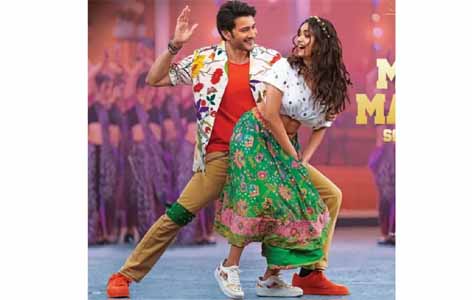 As Mahesh Babu's Sarkaru Vaari Paata is nearing release, the makers are all set to release a new song from the film, which is a messy number. Titled Ma Ma Mahesha, the mass number will feature Mahesh Babu and Keerthy Suresh flaunting their dance moves and will be out on May 7. Music is scored by S Thaman and choreographed by Sekhar master.
Along with the announcement, a song poster of Mahesh Babu and Keerthy Suresh was released and promises an upbeat and colourful dance number. Dressed in a floral shirt over a red t-shirt and khaki trousers, Mahesh Babu appears dynamic with a delightful smile on his face. The Bandana tied on his knees added more mass appeal. Draped in a crop top and multicolor lehenga, Keerthy Suresh looks elegant by styling her hair in loose curls.
The film’s pre-release event will also be taking place tomorrow and there will be many surprises in the store for movie buffs. Sarkaru Vaari Paata is helmed by Parasuram of Geetha Govindam fame and marks the debut of Mahesh Babu's daughter Sitara. Sarkaru Vaari Paata is scheduled to release worldwide in theatres on May 12.
R Madhi handles the cinematography, while Marthand K Venkatesh is the editor and AS Prakash takes care of the art department. The much-awaited film is jointly produced by Naveen Yerneni, Y. Ravi Shankar, Ram Achanta, and Gopichand Achanta under Mythri Movie Makers, GMB Entertainment, and 14 Reels Plus banners.