Schools can,t stop students from appearing in exam over fee 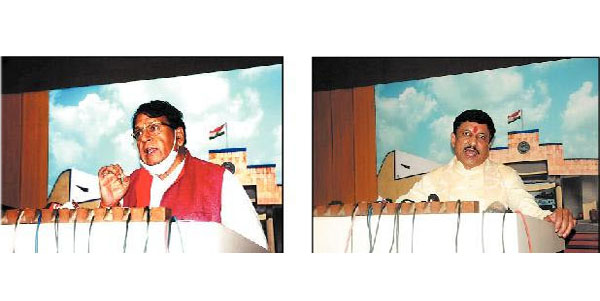 Chronicle Reporter, Bhopal-During the Question Hour on Monday, the sixth day of the budget session of the Vidhan Sabha, School Education Minister Inder Singh Parmar said whether CBSE schools or schools affiliated with the MP Board of Secondary Education, all schools will be able to charge only tuition fees from children during the Corona period. If a school does not follow the instructions, its affiliation will be terminated. He said the schools can’t stop students from appearing in exam over non-payment of fee.
He said in the House, the government will issue instructions to all the collectors of the state in this regard. Earlier, Bahadur Singh Chauhan, a BJP MLA from Mahidpur, had raised the matter of a school in Dhar. On this, many Congress and BJP MLAs alleged that many schools are taking full fees from children. Children not paying full fees are not allowed to appear in the exams.

2 MLAs join proceedings online
This was the first time in the history of Madhya Pradesh Vidhan Sabha when two MLAs joined online in the proceedings of the House. MLA from Mandla Narayan Singh questioned Tribal Minister Meena Singh in the matter of vocational education in Eklavya Adarsh Residential Schools. Similarly, Congress MLA Dr. Ashok Marsakole also responded online. Although Parliamentary Affairs and Home Minister Dr. Narottam Mishra said that this arrangement will continue with the permission of the Speaker, but this permission should be given only in special circumstances so that the dignity and seriousness of the House will remain.
The Freedom of Religion Bill 2021 against Love Jihad may be passed on Monday. Assembly Speaker Girish Gautam has set aside only 15 minutes to debate the bill in the House.

Rajput replies to adjournment motion on Sidhi accident
On the Sidhi bus accident, Transport and Revenue Minister Govind Singh Rajput said that the accident is an accident, it cannot be stopped, but our effort should be that such accidents do not recur. In this temple of democracy, as the representative of seven and a half crore people of the state, we should take a decision on both the sides of any event-accident and decide how to prevent it.
Speaking on the adjournment motion on Sidhi bus accident, he said that on receiving the information of the accident, first of all he informed the Chief Minister Shivraj Singh Chouhan about this heartbreaking incident. Being the Transport Minister, the Chief Minister asked me to be present in the Ministry and make arrangements related to the incident. Seeing the seriousness of the accident, Chief Minister Chouhan immediately sent two senior ministers of the state Tulsi Silavat and Ramkhelavan Patel to the site to monitor relief and rescue operations and to cancel a major programmes organized in the cabinet and Damoh. On the second day, the Chief Minister himself left for the incident site. There he met the victim families and directed the military officers and local police administration for the rescue operations.
Rajput said government provided immediate assistance to the affected families for the funeral of each deceased. Apart from this, an amount of Rs 7 lakh each was sanctioned to the families of each deceased and made available to 47 families.
The Transport Minister said that it is not true that registration, permit, fitness and insurance of the crashed bus number MP19P-1882 had expired. The vehicle was registered with Satna RTO on 1 May 2014. The manufacturing year of the said 32 + 2 seater vehicle is valid till January 1, 2014 and its fitness year 2021. The insurance of the vehicle is valid till 28 September 2021, the policy of which is New India Insurance Company 45040031200100010428. The permit to the vehicle was issued on May 23, 2020, with validity till May 12, 2025.
In response to the operation of buses without permits and overloaded unfit buses in the state, Minister Rajput said that action was taken against 1066 vehicles till February 24, 2021 this year, on which a fine of Rs 3 crore 60 lakh was charged.
On the demand for the examination centers to be built at the district level for future examinations, he said that he will discuss with the Chief Minister to set up examination centers at the district level. In another reply, he said that he will also discuss with the Chief Minister Chouhan to provide advocate to the victim families to get the insurance claim amount.