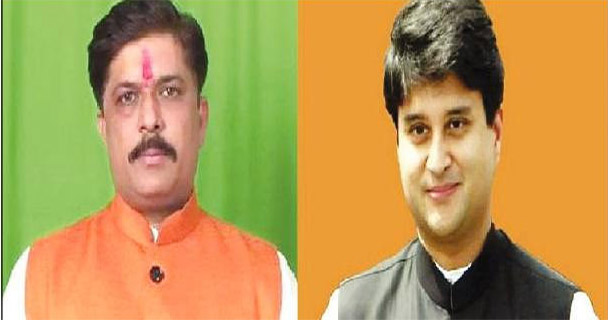 KP Yadav, who defeated Jyotiraditya Scindia by a huge margin of more than one lakh votes in a tough contest in Guna-Shivpuri parliamentary seat in the last general election, and Scindia are now in the same political party and for the last two and a half years. A lot of water has passed in Chambal and Betwa rivers but the hearts of these two leaders are not being found. In the midst of them, the mood is increasing and increasing. It is a matter of fact that KP Yadav, who made headlines across the country after defeating the head of the Gwalior royal family in his traditional seat, is not only an MP but Scindia is an influential Union Minister in the Modi government. Yadav regrets that even after giving shocking election results, he could not get the stature and status he deserved in the party.
Yadav has been expressing his anguish at various forums at times but this time the letter bomb burst by him has echoed till Bhopal and Delhi. It is worth noting that Lok Sabha member KP Yadav had written a letter directly to BJP National President JP Nadda expressing his pain. In the letter, MP Yadav has put his own party in trouble by writing that the pro-Scindia ministers and their pro-leaders are working against the principles of the party. This is creating confusion among the party workers. Yadav is pained that he and the loyal office bearers are being neglected in the party programs by the pro-Scindia leaders. Even invitations are not given in programs.
Analysts of politics believed that if the smoke rises then there will be fire too, but at present the opposite has happened. Scindia, who came to Gwalior today, has given his point of view by taking it in a positive way instead of answering the grievance of his election rival in the same harsh tone. On the allegations of MP KP, Union Minister Scindia said that KP Yadav is a member of my family because every BJP worker is our member and all of them should work together with each other. The lack of union with each other should also be filled. Along with this, Scindia did not forget to say that the responsibility given under the leadership of PM Modi and BJP President JP Nadda should be fulfilled together.
It is believed that Scindia may contest the next Lok Sabha elections from Guna-Shivpuri. Sources reveal that MP Yadav is alert to this possibility and is trying his best to establish his political existence by making a dent in the dominance of Scindia supporters in his area. It is also hot news that as soon as he opens his front against Scindia camp, Congress has invited him to come here with the promise of ticket from Mungawali assembly constituency. KP's response on this has not been received yet.

They say...
Brajendra Singh Yadav)
In a democracy, everyone has the right to speak his mind, but MP KP Yadav's allegations are not logical, cannot be agreed with them. As an MP, he has to follow protocol. He is not only invited to every program, but his name is also inscribed on the stone plaques.
Brijendra Singh Yadav, Minister of State, Government of MP