Scindia will take on Nath and Digvijaya in their strongholds 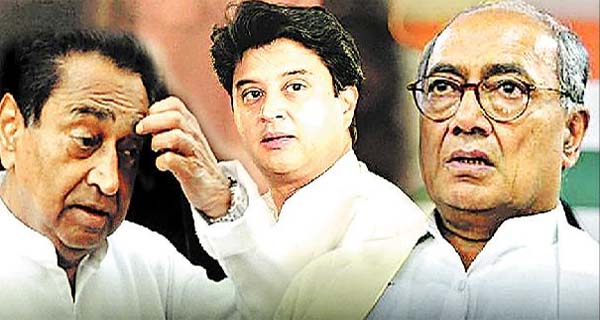 Khilawan Chandrakar, Bhopal
Jyotiraditya Scindia, who has created turmoil in Indian politics by changing power in Madhya Pradesh a year and a half ago, is going to visit Madhya Pradesh for the first time after becoming the Union Civil Aviation Minister. He will be on a three-day visit to his old parliamentary constituency Guna as well as Rajgarh and Chhindwara from August 16.
Since Rajgarh is considered to be the stronghold of former Congress chief minister Digvijaya Singh and Chhindwara Kamal Nath, his visit has already started a stir in the political corridor and is seen as a part of the strategy of the BJP organization and early preparations for the upcoming 2023 assembly elections.
BJP's election strategy has become to surround both the top Congress leaders Kamal Nath and Digvijaya Singh in their home constituency as well as in the area of ??political influence in Madhya Pradesh. Under this, work has also been started at the field level. According to this plan of BJP, Jyotiraditya Scindia can also hold meeting of party workers in Rajgarh and Chhindwara, general meeting and foundation stone and Bhumi Pujan. The party also has a plan that for some reason, Scindia, who has not yet joined the mainstream of BJP, leaving the Congress, can get the supporters to join the party collectively.

Cong also started defensive preparations
Till now, Scindia has been participating in his political activities till Malwa, the area included in his royal family in addition to his stronghold Gwalior-Chambal, but his interference in the matter of Rajgarh used to be less. Similarly, along with the Chhindwara Lok Sabha seat, all the 8 assembly constituencies included in the area are also in Congress's court. On which the BJP wants to start its penetration by activating Scindia. Even though there has not been any official response from the Congress on this issue, but it is believed that the Congress's defensive preparations have also started in eating inside for the proposed visit of Scindia. Special attention is being given to those leaders and workers of the party who have been close and in touch with Scindia in some form or the other.

Versions
It is the decision of the national leadership of the party that all the new ministers of the state should be made active in their sphere of influence. Accordingly, Scindia's visit is also proposed in Guna, Rajgarh and Chhindwara. Union Minister Dr. Virendra Singh will also visit the state. Nothing has been decided yet, but their meeting with the workers is being fixed.
-Bhagwandas Sabnani, State General Secretary BJP

Those who have been rejected by the people of their area are not going to have any effect on the health of the Congress, both Rajgarh and Chhindwara are the areas of influence of the invincible warriors of the party. Scindia's visit will not affect the health of Congress. Party workers are united and can face every challenge.
-Narendra Saluja, media in-charge Congress