Scindia will try to rehabilitate his supporters 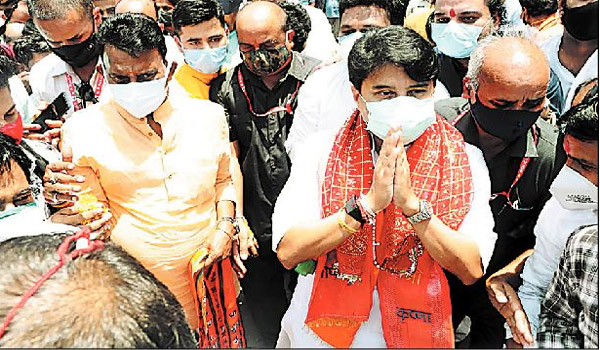 Jyotiraditya-Scindia reaches Bhopal on a 3-day visit; will try to ensure place for his supporters in governance and organization

Khilawan Chandrakar, Bhopal
Rajya Sabha MP Jyotiraditya Scindia is on a three-day stay in Madhya Pradesh from Wednesday. Scindia reached reached the state president VD Sharma's house directly from the airport and there was a closed-room meeting between the two leaders. Earlier, Scindia said about his stay that BJP is my home. That's why I have come to meet everyone. After this he reached the bungalow of Chief Minister Shivraj Singh Chouhan. After meeting him, the issue of adjustment of supporters in the corporations, boards is believed to have been discussed.
Earlier, Scindia denied leadership change and political change, saying that Congress raises such questions. This is their real face. Congress had also raised questions about the vaccine, but the public gave the answer.
Earlier, Scindia said that it is a normal meeting. It should not be seen through a political lens. I and VD Sharma are from the same background. We have a personal relationship. Mutual relations are strengthened by personal meeting. On Jitin Prasada joining BJP, Scindia said that he is my brother. Welcome to BJP, the political party which has written a new chapter in the development of the country.
BJP state president VD Sharma said that every meeting should not be described as diplomacy. This is a routine meeting. Discussion on corporation board and all subjects VD Sharma said that it is obvious that when leaders meet, many things are discussed. Decisions in BJP are collective. He described the news of change of power as a gift of Congress. On the new working committee of BJP, he said that everyone will work together and strengthen the party. In the formation of the working committee, every section and every area has been kept in mind.
On the question of meeting the leaders in Bhopal, he said that if we meet amongst ourselves, then you (Congress) are unhappy, do not meet, then you raise questions. Only they tell us what to do, which makes you happy? Regarding the meeting between Scindia and state president VD Sharma, it is believed that there was a discussion between them regarding the appointments in the corporation boards.
After the announcement of the State Working Committee just a day before the arrival of Scindia, now the pressure is increasing on Chief Minister Shivraj Singh Chouhan to make political appointments in the government. The reason for this is that last week state president VD Sharma, National General Secretary Kailash Vijayvargiya, Narottam Mishra and Union Minister Prahlad Patel had held closed-door meetings. It is being said that apart from the State Working Committee, there was a discussion regarding the appointments in the corporations, boards.
Obviously, Scindia will also try to connect his supporters with power and the mainstream of the organization, who have been waiting for a long time. After the feedback received from Bhopal, he can try hard in Delhi also.
In the possible expansion of the Union Cabinet, Jyotiraditya can be given the post of Minister of Railways or Human Resource Development. Obviously, the pressure of supporters has also increased as they also want to be established. In such a situation, naturally his efforts to bring his long awaited supporters into the mainstream will also intensify. Many supporters of Scindia have been waiting for their rehabilitation for the last one and a half years since joining the Congress.

Imarti Devi, Kansana, Dandotia could be adjusted in PSUs
Former ministers Imarti Devi, Endal Singh Kansana and Girraj Dandotia, who lost after the  assembly by-elections, are also trying to get a place in a PSU, corporation, board etc. for a long time. Similarly, to get a place in the organization, there are a dozen such leaders including Pankaj Chaturvedi, youth leader Krishna Ghatgai, who are longing to make their position in the organization.
It is believed that due to the government's engagement during the Corona transition period and the organization's activism to help the people in the second wave of Corona after the Damoh by-election, so far Scindia supporters have not been given a place according to their ability and according to the wishes of Jyotiraditya Scindia. Now the second wave is nearing its end. Markets have also started opening and economic activities have also started almost like before. In such a situation, the time has come to honor Scindia's wish.
It is also believed that the continuous neglect of Scindia supporters will give an opportunity to the Congress to raise its voice, which the top leaders of the party's organization and power want to stop in any case. If this is considered to be true, then surely in the near future the pro-Scindia leaders can be crowned in the corporations, mandals as well as the party organization.
Many supporters from all over the state have come to Bhopal to meet Scindia. Later, Scindia will be on a tour of Gwalior Chambal division and obviously will also meet his supporters there and share the information about the development in Bhopal.