Security tightened at airport for R-Day 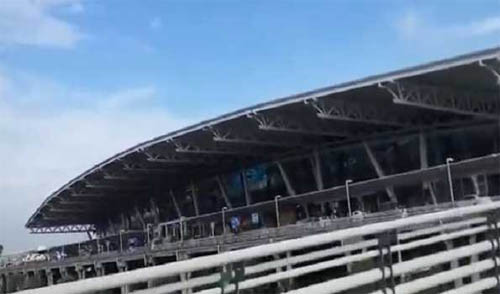 Chennai, Jan 25 (UNI) Security arrangements has been tightened  at the Kamaraj domestic and Anna International airport here in view of the 72nd Republic Day celebrations tomorrow.
Airport sources said the security was enhanced and several restrictions were put in place for passengers following intelligence inputs from the Centre alerting the States of possible disruption  of celebrations by terror outfits.
Apart from the apart, security has also been tightened in  all places where public would congregate like airport, bus depots, railway stations, temples and places of worship.
At the airport, additional security personnel were deployed  in the cargo area from today morning and all passengers withvalid tickets alone were allowed entry after thorough checks. Vehicles entering the airport were also subjected to intense  checks.
Entry of visitors were banned till January 31.
After the mandatory checks by the CISF personnel, who were  manning the airport security, the passengers were again checked
thoroughly by the security personnel of respective airlines before  they were allowed to board the aircraft.

Passengers were not allowed to carry liquid items, pickles and jams.
All the CISF personnel were aksed to report for duty and their  leaves were cancelled and additional bomb detection and disposal
squads were deployed for intensive checks in parking and other  areas in the airport.
Surveillance has also been enhanced through CCTV cameras and Rapid Action force personnel were also deployed.
Apart from the CISF personnel More than 100 personnel from the  State police were also deployed on round-the-clock security duty.