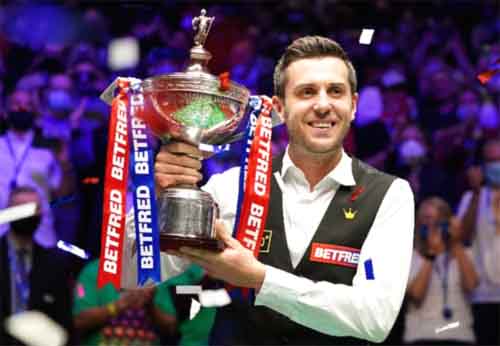 LONDON, May 4 (Xinhua) Mark Selby defeated a stubborn Shaun Murphy 18-15 to clinch his fourth title at the Snooker World Championship on Monday.

Selby, 37, led 14-11 ahead of the final session and was one frame away from victory after expanding his lead to 17-13. Murphy then chased two frames back, but could not stop Selby from clearing the table in the 33rd frame for his fourth win in seven years.

"It's unbelievable to win it for a fourth time," Selby told the World Snooker Tour website. "It's such a tough tournament. To beat (Ronnie) O'Sullivan to win my first title in 2014 was a dream come true. Shaun played fantastic, he is a great player and great ambassador. "

A limited crowd was allowed in the Crucible in Sheffield since the first round after snooker players had competed behind closed doors for several months due to COVID-19.

On the final day on Monday, a full capacity of nearly 1,000 audience members returned for the first time in more than a year.

"Life has been very difficult for everyone in the last 12 months," said Murphy. "I want to say a very deep personal thank you to everyone who has bought a ticket and come here over the last 17 days. Sport is nothing without the fans and we have been so delighted to have everyone back for the past fortnight. I am gutted to lose but thrilled to have been part of a great match."

A total of five Chinese players took part in the final stages of this year's World Championship with Yan Bingtao the only one who reached the second round. The 21-year-old Masters champion lost to Murphy 13-7.