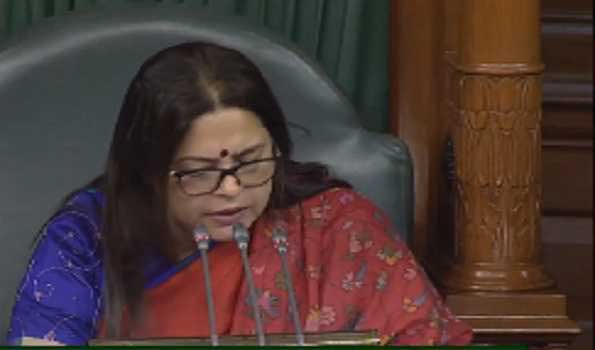 New Delhi, Seven lawmakers of the Congress were suspended in the Lok Sabha for the remaining session for their unruly behaviour on Thursday.When the House met after adjournment at 1500 hrs, Ms Meenakshi Lekhi, who was in the chair, said the seven members -- Gurjeet Singh Aujla, Behanan Benny, Gaurav Gogoi, Dean Kuriakose, T N Prathapan, Manickam Tagore B and Rajmohan Unnithan -- tore up papers from the Chair's desk.The House condemns such behaviour, she said.Parliamentary Affairs Minister Pralhad Joshi said the members showed disregard for the Chair.The seven Congress members were suspended under rule 374 for the remaining session after voting in the House.When the House reassembled at 1300 hrs, Union Health and Family Welfare Minister Harsh Vardhan made a suo motu statement regarding measures taken by the government to prevent the spread of the deadly disease.After the statement, Mr Rajendra Agarwal, who was in the Chair, asked all parties to give suggestions on the issue.All party leaders spoke and gave their pointed remarks which went smoothly.Mr Beniwal made remarks taking names of Gandhi family, including Sonia Gandhi and Rahul Gandhi, which agitated the Congress members. They were on their feet instantly and trooped into the Well.The Chair expunged Mr Beniwal's remarks and tried pacifying the agitated members but to no avail. Congress members displayed placards in front of the Chair. They tore papers from the Speaker's desk and tossed it towards the Chair.He then announced adjournment till 1400 hrs.Ms Lekhi said the suspended MPs will have to vacate the Parliamentary premises immediately and announced adjournment for the day.