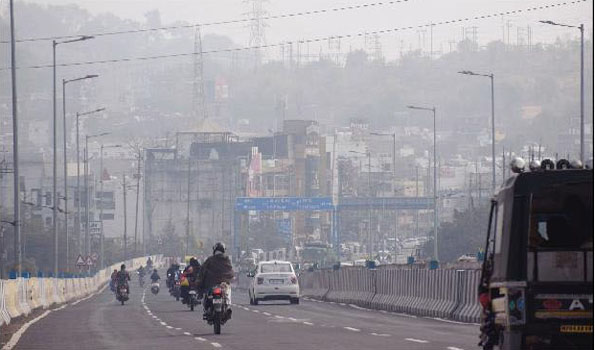 Chronicle Reporter, Bhopal
Due to cloud cover in Madhya Pradesh, there has been a sharp drop in the day temperature across the state. The mercury was lowest in Gwalior and Naugaon of Chhatarpur. Here the temperature came down to 12 degree Celsius. At these places mercury was recorded 10 degree Celsius below normal.
For the first time in most parts of the state, the maximum temperature came down below 20 degree Celsius. Bhopal, Indore, Gwalior, Guna, Betul, Ujjain, Damoh, Jabalpur, Khajuraho, Naugaon, Sagar, Seoni, Tikamgarh and Umaria saw day temperature drop from 5 degree Celsius to 10 degree Celsius in the grip of extreme cold wave. There may be some increase in the night temperature due to cloudy sky during the day.
Due to the winds coming from Pakistan, there is fog and cloud cover in Madhya Pradesh. It is chilly during the day. The night temperature was recorded below 10 degrees in most of the areas. There were light showers in Chhindwara, Malajkhand, Seoni and Mandla. According to meteorologist Vedprakash Singh, the new system can be active from Sunday onwards. Its effect will be visible from Saturday night itself. You can get some relief from the cold. The day temperature can remain around 20 degrees due to cloud cover.

Night tamp below normal at many places
At present, cold weather continues in Madhya Pradesh. There was not much difference in temperature during the twenty-four hours. In most areas, the night temperature remains below or near 10 degrees Celsius. The day temperature is stuck around 20 degrees. Chills due to dry and cold winds.
There has been a slight rise in the night temperature in the state. This effect is due to the winds coming from Pakistan. The temperature is likely to rise in the same manner for the next four days. The night temperature has increased to 1 degree Celsius at some places. The meteorologist said that on January 16 and January 18, two more consecutive systems are likely to form. The systems running now were very weak. So their effect was not much. The systems being built in the coming times are somewhat strong. This will affect the weather of Madhya Pradesh.