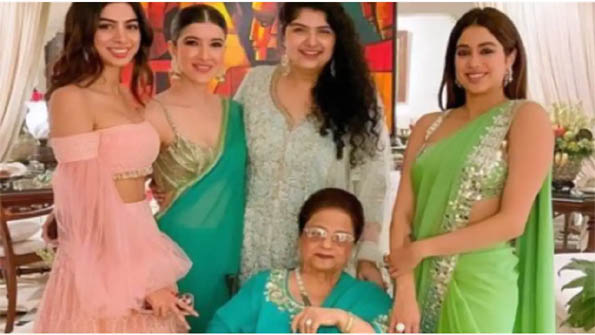 Sanjay Kapoor and Maheep Kapoor’s daughter Shanaya Kapoor is quite active on social media. While the actress will soon be making her Bollywood debut with the film Bedhadak, she already has a massive following on social media, with 1.4 million followers on Instagram alone. Shanaya shares a great bond with her cousins Janhvi Kapoor, Khushi Kapoor, Anshula Kapoor and Arjun Kapoor, and shares the most amazing pictures with them every now and then. Now, on the occasion of Nirmal Kapoor’s birthday, Shanaya has posted an epic fam-jam picture featuring her ‘dadi’ Nirmal Kapoor, and cousins Janhvi Kapoor, Khushi Kapoor, and Anshula Kapoor.
Shanaya Kapoor took to her Instagram stories to first post a picture with Nirmal Kapoor, wishing her a happy birthday. They can both be seen decked in green traditional outfits in the picture. “Happy Birthday dadi,” wrote Shanaya. Meanwhile, in her next story, she posted a throwback picture from the Diwali bash, and it shows Shanaya, Janhvi, Khushi and Anshula posing behind their grandmother Nirmal Kapoor. While Janhvi and Shanaya look absolutely stunning in their sarees, Anshula opted for a grey dress. Khushi Kapoor looks like a princess in an off-shoulder pink coloured lehenga. Check out the beautiful pictures below.
Meanwhile, Sonam Kapoor also wished Nirmal Kapoor on Instagram. She shared a precious picture of Nirmal Kapoor holding Sonam Kapoor and Anand Ahuja’s son Vayu in her arms. Meanwhile, she also shared another throwback picture that shows little Sonam posing with her dadi. Sharing the snaps, Sonam wrote, “Happy happy birthday dadi love you @nirmalkapoorbombay.”
Meanwhile, on the work front, Shanaya Kapoor and Khushi Kapoor will soon be making their Bollywood debuts. While Khushi will be seen in Zoya Akhtar’s The Archies, Shanaya will be seen in Dharma Productions' Bedhadak, co-starring Lakshya Lalwani and Gurfateh Pirzada.
Janhvi Kapoor is currently prepping for her next film Mr & Mrs Mahi, which also stars Rajkummar Rao. The actress also has Bawaal with Varun Dhawan, and Mili along with Sunny Kaushal and Manoj Pahwa.