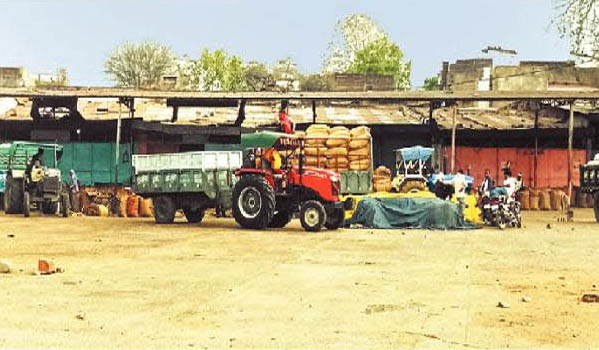 It is not easy to satisfy BJP people - Vidisha Mandi secretary's audio goes viral
Mandi MD handed over show cause notice
Chronicle Reporter, Bhopal/Vidisha
After the audio went viral for the last several months, the problems of the Mandi Secretary of District Vidisha, Kamal Kumar Vaigavaiya, have increased.
The show-cause notice has been given to him by Vikas Narwal, MD, MP State Agricultural Marketing Board. The reply of this notice issued last month was to be given to Mandi Secretary Vidisha within 10 days. But what action was taken has not been disclosed yet. An attempt was made to get a response on phone from the Managing Director of the Mandi regarding the allegations against Vaigavaiya and the show-cause notice issued to him, but the phone was not received by him.
= Traders' allegations and questions
1-He has been stick on for five years on the same post and in the same Mandi.
2-He asks for bribe to renew the license
3-To which minister's house was Sharbati wheat worth Rs 64000 delivered?
4-Which BJP leaders have to be handled?
5-Whether Mandi's government rest house and canteen given on rent to contractor

Mandi rest house and canteen given run on rent
Grain merchant Ved Prakash Sahu alleges that Mandi Secretary Kamal Kumar Vaigavaiya has given Mandi's rest house and canteen on rent to a contractor doing construction work in New Mandi. The contractor has kept his laborers in the rest house and iron and other items of the contractor have been kept in the canteen.
Kamal Kumar Vaigavaiya has been stuck in Vidisha Mandi for five years
According to Vidisha Grain merchant, no action can be taken against Mandi Secretary Kamal Kumar Vaigavaiya, while he is working as Mandi Secretary in Vidisha Grain Mandi for the last five years. Kamal Vaigavaiya had asked for 10 thousand rupees for the renewal of my license, on talking about making his complaint, the Mandi secretary says that you cannot spoil anything against me, I send money from bottom to top. Merchant Jain told that an audio of his had also gone viral, in which he is saying that he had delivered Sharbati wheat worth 64 thousand rupees to the minister's house, while in the viral audio, he says while using abusive language that the auditors who came to the market to audit has taken 3 fans with him.
Its old case, I am a victim - Mandi Secretary
When asked about the notice given by Mandi's MD Vikas Narwal to Mandi Secretary Kamal Kumar Vaigavaiya, he says that this matter has become old, what was supposed to happen has happened. I myself suffering, you can remove me out of here.