Sharmila Tagore opens up on working in Gulmohar: I felt like a newcomer on the set 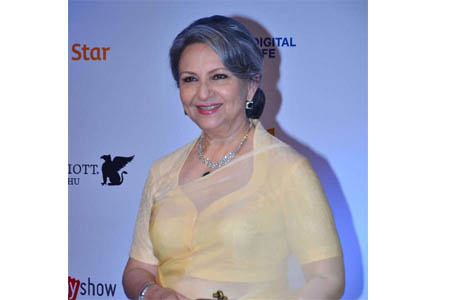 Sharmila Tagore is one most popular, loved, and evergreen actresses of all time. After over a decade, she is all set to return to films and will star in Gulmohar, which will also feature Manoj Bajpayee and Amol Palekar along with Suraj Sharma and Simran Rishi Bagga in pivotal roles. Tagore was last seen in the 2010 film Break Ke Baad starring Deepika Padukone and Imran Khan. Recently, in an interview with Hindustan Times, the actress opened up about working in the film Gulmohar.
She said that she felt like a newcomer on the film’s set and brought her own perception to the character. She added that it was fun to work in a movie with no pressure. “It was something different from my life now. It was liberating, more like a wonderful holiday. That’s also because it is not my life anymore. My life right now is completely different. I’m not a working person anymore. I’m not going every day like everybody else to work, from one film to another. I worked in the film and now, I have gone back to my own life,” she added.
On their grandkids' reaction over Gulmohar, Sharmila Tagore told that Soha Ali Khan’s daughter Inaaya already congratulated him on the message for the film while Taimur and Jeh are not allowed to movies right now. However, she said that she assumed that it will be different when they will watch her onscreen. “Sara and Ibrahim and grown-up. They will watch and better like it,” she concluded.
Talking about the film Gulmohar, the film is slated to release in August 2022 on the OTT platform Disney+ Hotstar and is directed by Rahul Chittella. It revolves around the multi-generation Batra family who is all set to move out of their 34-year-old family home.