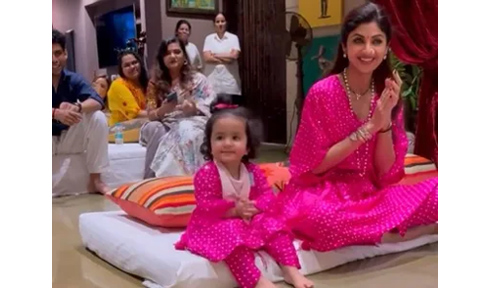 Bollywood actress Shilpa Shetty who is known to regularly promote the benefits of yoga, shared a video of her son Viaan teaching his one-year-old sister Samisha some yoga postures.
Bollywood actress Shilpa Shetty is known to shell out some major body goals along with regular yoga updates for a healthy life and soul. The actress has always practised yoga and has urged fans to do the same as well for the longest time. And now it turns out that her young ones are following in their mom's footsteps as well.
While there are numerous pictures and videos of her doing Yoga and even teaching her fans, now the Hungama 2 actress has shared a video on her social handle where son and daughter. Viaan and Samisha, both are seen doing Yoga. The children can be seen doing adorable yoga poses in the clip.
Shilpa shared the video, alongside the caption, “Kids are like wet clay. We must mould their approach towards a healthier lifestyle early. Inculcating the habit of enjoying a balanced diet, staying fit, and gaining control over the mind & soul is crucial. That’s exactly what I’ve tried to do with Viaan; and now, to see him take over the role and teaching his little follower, Samisha, makes me so proud. Seeing them bond over Yoga is truly the kind of Monday Motivation I need to stay fit and healthy… with them and for them.
Meanwhile, recently, Shilpa Shetty shared a never-before-seen video of her daughter Samisha to mark Daughter's Day. The actor shared a video filmed during the recent Ganesh Chaturthi celebrations and made a promise to her daughter. In the video, Samisha can be seen seated beside Shilpa during a pooja at home, sporting matching pink outfits.
Sharing the video, Shilpa wrote, “Happy Daughter’s Day to US, mine and ours… Thank you, Samisha, for choosing me. I promise you that even though we’ve been mother-daughter from the start, we’ll always be best friends forever from the heart Love you, my baby!”