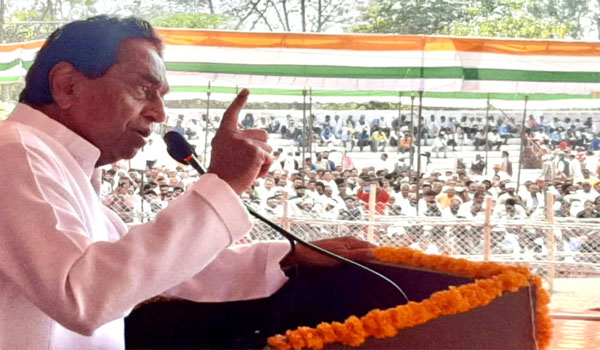 Chronicle Reporter, Bhopal-When you consider yourself so popular, you say that the public is with you, why do you go for EVM elections and not ballot paper? Today, the BJP has kept the EVM which has been rejected by countries like America, France, Germany, and Japan.

Former Chief Minister Kamal Nath said this while addressing the huge divisional conference of Congress workers held in Rewa. Paying homage to Saint Ravidas on his Jayanti, Nath said I salute him at his feet. Sant Ravidas not only fought for social justice, but he also fought for social reform, he also had a great contribution in the spiritual field.

Today, on the occasion of his birth anniversary, I ask you to select a suitable place for his statue, I will install the statue.

After 15 years, the Congress government came in the state, all of you elected the Congress. It is true that we have suffered in Vindhya, had we not suffered in Vindhya, even today the Congress government would have been in the state. But there is a lot of enthusiasm among the Congress workers here, the worker here is not weak. If you all decide, then the Congress flag will wave again in the state.
When Congress came to power the state was number one in farmer suicides, number one in atrocities on women, number one in unemployment? How many challenges were facing us, a big challenge was facing us in the field of agriculture. There was a need to bring revolution in agriculture because 70% of our economy is based on agriculture. Today, a farmer is born in debt and dies in debt. We accepted this challenge and started the work of loan waiver of farmers in the state in a phased manner. In the first phase, we waived the debt of 27 lakh farmers; the second phase of loan waiver was due to begin. Today, the second big challenge before us is the future of the youth, their employment. What is the state of unemployment today, we are all watching.

Nath said Shivraj ji introduced a lot of figures in his long speech in the assembly, tried to mislead through these figures but Shivraj ji has to understand that the statistics game is out of date. The youths cannot be misled by these false figures. Today no one wants to invest in Madhya Pradesh because there is no atmosphere of trust. The state is identified with mafias, I had started a war against these mafias, and I wanted to change the identity of the state because only when there will be an atmosphere of trust, investment will come in the state.