Shooting with a Buffalo is really a Chucklesome Experience, says Akash Makhija 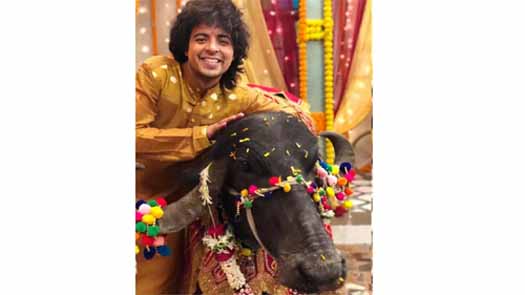 Love for animals is one thing but being crazy for them is completely a different story. Akash Makhija who is playing the role of Alaukik Awasthi in the Sony Entertainment Television new show, Sargam Ki Sadhe Satii has this crazy love for animals. Alaukik is a very eccentric character. He believes in supernatural beings and is always trying to look for signs in everything.This is not the first Akash is shooting with an animal, in the previous episodes, we have seen him playing with insects like cockroaches.
And In the coming episodes of Sargam Ki Sadhe Satii you will see a new cast on the show and i.e. a buffalo and it will definitely be going to be a delight to watch-- the chemistry between Akash and Buffalo on-screens.
Akash Makhija while talking about his scene with a buffalo says, "Now, this was something really unexpected. I mean who can think of a scenario where you are actually introduced to your fellow colleague in such a weird way, it can only happen when your fellow colleague is a buffallo. Alaukik has this weird obsession with animals, as you already know, earlier it was a shoot with cockroaches, and now a buffalo. And this was the energy everyone on set expected from me, so it was overall a challenging experience. The buffalo's name was Sushmita and we used to call her Sushi, you know to make it friendly and familiar. We shot with her for 6-10 episodes and it was a heck of an experience. Who could think of shooting with a buffalo, as per her convenience. Ya, we had to shoot when she was ready. She also used to shit all over the set, and these were the things we had to manage as actors."