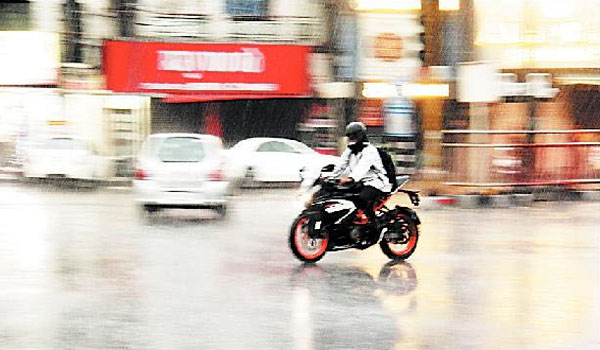 Chronicle Reporter, Bhopal
Due to the system in Karnataka, many areas of the state received showers with thunderstorms in the last 48 hours. Due to this, the mercury has come down below normal in most areas across the state. The nighttime mercury in the state capital, Bhopal, came down by up to 5 degrees. Meanwhile, there has been hailstorm with rains in Raisen. Showers were recorded in Bhopal and lightning kept flashing. The weather has also changed in Hoshangabad, Sagar.
Due to rain, the minimum temperature fell in most of the districts of the state. Senior Meteorologist JD Mishra said that the weather will remain the same in the state for the next two to three days. This is happening due to the system made in Rajasthan. From there, a trough line is passing through Madhya Pradesh. However, it will now have a greater impact in these areas, including Jabalpur and Betul. Thunderstorms may be cloudy in other areas.
Due to rain in the last twenty four hours in Bhopal, the mercury of the night came down. The minimum temperature here fell by 4.8 degrees. It was 3.8 degrees Celsius below normal. Ujjain recorded a maximum temperature of 4.5 degree Celsius, Hoshangabad 4.2 degree and Rajgarh 4 degree Celsius. There was relief from heat in 22 districts of the state. On Monday too, there was rain in many places in Bhopal.
The Skymet Weather said cyclonic cirrculation over Bihar and Jharkhand is likely to displace eastward along the foothills, though slowly over the next 2-3 days. It is going to drag the trough along with North Assam and Arunachal Pradesh. Small-scale cyclonic circulation may also be embedded in this feature enhancing the thunderstorm activity. The Bay of Bengal is providing the moisture support for the penultimate climax resulting inclement weather conditions lasting for nearly one week or beyond with short breaks in between. Persistent weather activity may as well result in some landslides and disruption in communication and connectivity.

Drizzle may continue for next 2-3 days
Senior Meteorologist JD Mishra said that a similar situation will prevail in the next two-three days. However, its effect will be more on southern Madhya Pradesh. There may be drizzle in many areas of the state in the coming days. It will have some effect for two days, but the effect will reduce on the third day.
In the last twenty four hours, the city of Bhopal recorded 3.4 mm of rain, while Bairagarh received 2.0 mm of rain due to less rainfall there. Apart from this, 2.7 mm rainfall was recorded in Maljkhand, 4.4 mm in Seoni, 5.4 mm in Raisen, 1.4 mm in Guna, 3.5 mm in Hoshangabad, 5.4 mm in Pachmarhi, 6.4 mm in Betul, 3.8 mm in Gwalior and 4.4 mm in Datia. Light rain and drizzle occurred in other districts including Indore, Jabalpur, Ujjain and Shajapur.