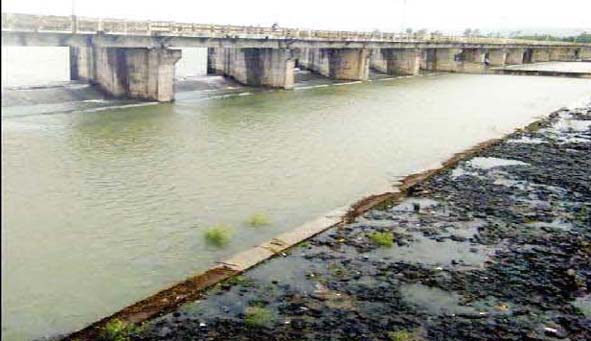 Bhopal: Intermittent showers in the city have thrown life out of gear. The rainfall continued during the intervening night of Sunday and Monday inundating low-lying localities. Several low-lying areas of the Madhya Pradesh capital were flooded, as showers have continued to lash the city for the last two days.
According to weather experts, at present, along with South Uttar Pradesh, a low pressure area remains over Haryana as well. The turf line passing through these two is going till the Bay of Bengal. Due to this, there may be heavy rain at isolated places in Gwalior, Chambal, Bhopal, Ujjain, Sagar, Rewa divisions of the northern part of Madhya Pradesh, although Indore will have to be satisfied with drizzle.
The monsoon has been wreaking havoc in the Gwalior-Chambal region for a couple days. A large number of villages in Sheopur, Shivpuri and Guna districts have been marooned because of heavy rains.
Due to the activation of low pressure area in South Uttar Pradesh, it is raining heavily in Madhya Pradesh. Due to the highest rainfall in the areas of Gwalior-Chambal, Parvati, Kuno, Kwari and Sindh rivers are in spate, causing floods here. In the next 24 hours also, no relief is expected in Gwalior, Chambal, Bhopal and Ujjain divisions.

Heavy rain alert: The Meteorological Department has issued an alert of heavy rain in these areas during 24 hours. Along with this, rain will also occur in Chhatarpur, Tikamgarh, Sagar, Niwari and Hoshangabad. In the last 24 hours, Gwalior-Chambal division has received maximum rainfall.
In Vijaypur, Sheopur, people are being evacuated from the midst of rain and brought to the roofs of houses.
In the last 24 hours, Datia received 12.5 cm of rainfall, Sheopur Kalan 12cm, Guna 10 inches, Tikamgarh 9 cm, Naugaon 7.7 cm, Pachmarhi 6.5 cm, Gwalior 5 cm, Bhopal City 5 cm, Shajapur 5 cm, Narsinghpur 5 cm, Khajuraho 4 cm, Raisen 4 cm, Satna 2.5 cm, Ujjain 2.5 cm, Jabalpur 2.5 cm and Hoshangabad received 2.5 cm of rainfall.
Red Alert: At some places in Gwalior and Chambal divisions.
Orange Alert: Ujjain, Bhopal division as well as Chhatarpur, Tikamgarh, Sagar, Niwari, at some places of Hoshangabad district.
Drizzle rain: At most places in Jabalpur, Sagar, Rewa, Bhopal, Hoshangabad, Ujjain, Indore, Gwalior and Chambal divisions.
Man dies, wife injured as lightning strikes
A couple sleeping in their courtyard was hit by lightning in Morena district late on Sunday night. While the husband died on spot, the wife received serious burn injuries. She has been hospitalized. The deceased Birbal Rawat was a resident of Battikhar village in Sabalgarh Tehsil of the district. The incident occurred at 2AM. Birbal and his wife Ramrati Rawat were sleeping in the courtyard of the house when they were hit by lightning. Ramrati was taken to a nearby hospital from where she was referred to the district hospital.