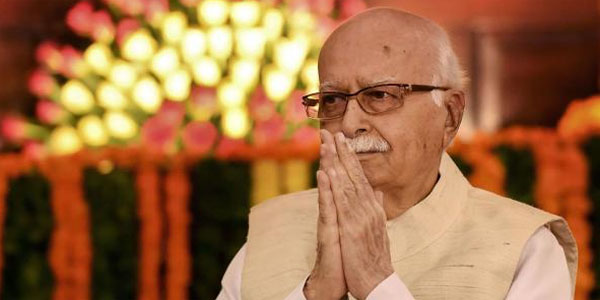 BJP Veteran and former Deputy Prime Minister LK Advani said on Tuesday that the temple of Shri Ram will lay the foundation of Ram Rajya in the country where justice will be done for all.

Mr Advani, who gave a new direction to the politics of the country in the 1980s, gave a very emotional message on the eve of the commencement of the construction of a grand temple on the Sri Ram Janmabhoomi in Ayodhya.

He said, "Some dreams of life take a lot of time to be fulfilled, but when they are important, then it seems that the wait was meaningful.

" One such dream which is close to my heart is now being fulfilled."

He said that Bhumi Pujan of Shri Ram temple is being done by Prime Minister Narendra Modi at Shri Ram Janmabhoomi in Ayodhya.

'Certainly not only for me, but for the entire Indian community, these moments are historical and emotional,' he maintained.

Mr Advani said the construction of a grand temple of Shri Ram on the birthplace of Shri Ram has been a dream of the BJP and also a mission.

'I feel humbled that destiny gave me the responsibility of traveling to Ramrath from Somnath to Ayodhya during the Ramjanmabhoomi movement in 1990 and this journey inspired the aspirational energy and aspirations of innumerable people. On this auspicious occasion, I express my gratitude to all the saints, leaders and people abroad who made valuable contributions and sacrifices in the Ram Janmabhoomi movement.'

He said, 'I am also happy that as a clear decision given by the Supreme Court in November 2019, the construction of Shri Ram Temple is starting in a very peaceful environment. This will be very helpful in strengthening the mutual relations of Indians.'

Mr Advani maintained that , "I also believe that Shri Ram Temple will represent India as a peaceful and amicable nation where there will be justice for all and no one will be excluded so that we can move towards Ramrajya which is the model of good governance."

The senior BJP leader will not be able to participate in the Bhoomipujan program to be held in Ayodhya tomorrow due to Corona pandemic.