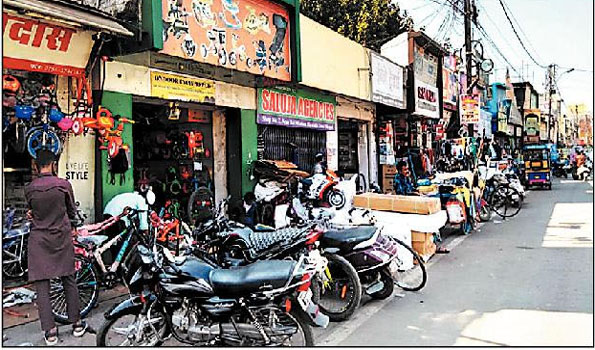 After a dispute with the brother of the Education Minister, the bank worker was beaten up by the mob; community comes out in support

Chronicle Reporter, Bhopal
After a dispute with the brother of MP School Education Minister Inder Singh Parmar, the case of thrashing a bank employee has snowballed into a major controversy. The Sindhi Central Panchayat in Bhopal has called for a bandh on September 25 as no action was taken against the minister's brother and supporters. Many businessmen have also given support to this bandh. The wholesale grocery market will remain closed till 2 pm.
Officials of the Sindhi Central Panchayat claim that most of the traders of the capital have assured to remain closed. President Bhagwandev Israni told that the bank worker Naresh Phulwani was beaten up inside and outside the bank by the brother of School Education Minister Parmar and his supporters, but instead of taking action against the culprits, the police had registered a case against Naresh and sent him to jail. Memorandums were also given to the Collector-SP in Shajapur to take action against the culprits, but no action was taken. Bhopal Bandh has been called on 25 September in protest against this attitude of the administration. Which is supported by all the traders. There is also support from different societies.

Wholesale grocery market will remain closed
Bhopal Grocery Traders Federation General Secretary Anupam Agarwal said that the wholesale grocery markets of Jumerati, Hanumanganj and Janakpuri will be closed till 2 pm in support of the bandh called by Sindhi Central Panchayat. Along with this, action will be demanded against the culprits.

This was the incident
The incident took place on July 15 with Naresh Phulwani, an employee of the Central Bank of India at village Pochaner in Shajapur district. This village is the home village of Minister Parmar. There was an argument when Naresh allegedly demanded 150 rupees for making passbook of Hariprasad Parmar (70). Naresh was accused of pushing the elderly Hariprasad out. In this case, the police had registered a case against Naresh and sent him to jail.
However, after 3 days a video surfaced. In which Naresh was seen being beaten up by the mob. The elderly Hariprasad is the minister's brother. The police did not take any action on the other side as the matter was related to the Education Minister. That's why the members of the community are protesting.