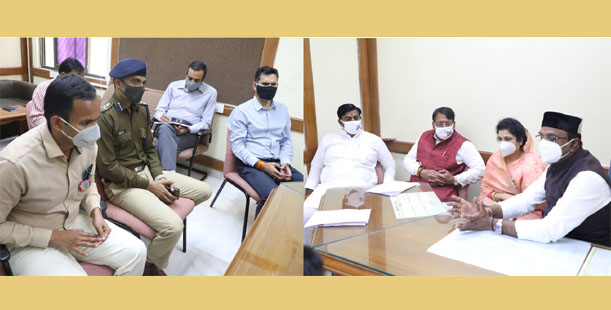 Thermal screening of people coming from Maha to be done; meeting of District Crisis Management Group held
Chronicle Reporter, Bhopal-The meeting of the District Crisis Management Group was held on Tuesday under the chairmanship of Medical Education Minister Vishwas Kailash Sarang. In the meeting, several important decisions were taken in view of the increasing corona cases in Bhopal.
In the meeting, it was decided with consensus that thermal screening of people coming from Maharashtra should be done. Necessary steps should be taken for public awareness by holding meetings of social workers and businessmen under the chairmanship of SDM at police station level. In view of the increasing number of corona patients, a decision was taken in the meeting to stop the sit-in demonstration.

Corona guidelines to be followed at fairs
It was decided that 100 percent observance of Corona guidelines should be ensured at the fair sites in the district. Instructions should also be given to shopkeepers to apply masks and strictly follow social distancing in all markets. Municipal Corporation should start the Roko-Toko campaign for public awareness and penalty of Rs 100 should be imposed for not wearing masks. Corona guideline should be ensured in weekly markets.
In the meeting, MLAs Krishna Gaur, Rameshwar Sharma, P.C. Sharma, Vishnu Khatri along with Collector Avinash Lavania, DIG Irshad Wali, Municipal Corporation Commissioner K.V.S. Chaudhary and  other concerned officers were present.

MP second in the country in Covid vaccination
Madhya Pradesh is second in the country in Covid vaccination. Additional Chief Secretary Health has informed that 75 percent target has been achieved in the joint vaccination of health workers and front line workers. In Rajasthan the target is 76 percent. The national average in vaccination is 53 percent, while more than 75 percent vaccination has been done in 37 districts of the state. In Dindori 93 percent have been vaccinated, Bhind 89 percent, Alirajpur, Sehore and Chhatarpur 87 percent.

Gwalior, Indore, Datia lag behind in vaccinations
Chief Minister Chouhan directed to speed up vaccination of health workers and front line workers. At present, 66 percent vaccinations have been done in Gwalior and Indore and 65 percent in Datia, which is the lowest in the state. So far 72 percent of the targeted group has been vaccinated in Bhopal.