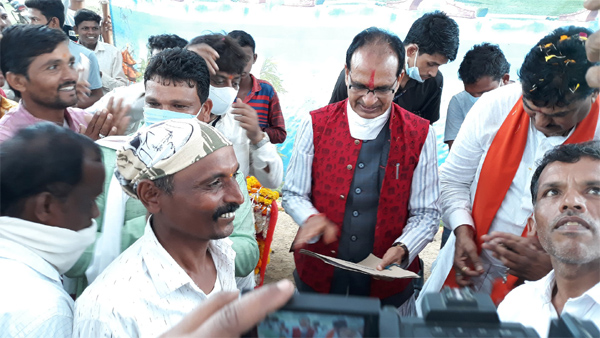 Rajendra Parashar, Khandwa
Chief Minister Shivraj Singh Chouhan is sweating even in the rain to win the Khandwa Lok Sabha by-election. On Monday, 5 cabinet ministers including the Chief Minister visited this area. The Chief Minister, who came to Bhikangaon, announced to make Jhirnya a city council and a lift irrigation project. This area is also a stronghold of tribal voters. Even before this, he had held rallies and meetings in the tribal dominated areas of Pandhana. The meaning is clear, the BJP has also made a strategy to win the elections on the basis of 6 lakh tribal voters.
Chief Minister Shivraj Singh Chouhan also held public meetings in Bhikangaon and Jhirnya. On Monday, 5 cabinet ministers including Chief Minister Shivraj Singh Chouhan were on tour in the Lok Sabha constituency. In Bhikangaon and Jhirnya, the Chief Minister did a road show by taking a general meeting. Announced to make Jhirnya a city council, sanction irrigation projects and sanction funds for road and drinking water works. Every angle of the electorate is being tested in the entire Lok Sabha constituency. The number of voters of the tribal community in eight assembly constituencies is more than 6 lakhs. Three assembly constituencies are reserved for this category. The burden rests on them.
Kamal Nath first tried to test the tribal community. He took the initiative through Barwani's conference. Chief Minister Shivraj Singh Chouhan had also devoted a whole day in the tribal-dominated Pandhana of this Lok Sabha constituency. Arrived in the tribal belt of Jhirnia and Bhikangaon on Monday. The CM reaching from village to village and getting photographed with a small worker also proves that the by-election of Khandwa Lok Sabha will be fought with a finer strategy.
It has become clear that the candidates will be only pawns in this election. He will be fielded, but the main faces will be Shivraj Singh Chauhan and Kamal Nath. The Sangh has also seen a clear picture in Madhya Pradesh that Khandwa seat can be won by bringing in effect of 6 lakh tribal votes. There is no hope from Muslim voters. The BJP will woo the pensioners and workers later. Inflation and one community can certainly give trouble to the BJP in establishing a foothold. There is also a strategy to bridge this gap with Modi and Hindutva, which the BJP will maneuver at the last moment.
The five cabinet ministers were Renewable Energy Minister Hardeep Singh Dung, Water Resources Minister Tulsi Silawat, Higher Education Minister Dr. Mohan Yadav, Agriculture Minister Kamal Patel and Energy Minister Pradyuman Singh Tomar in Khandwa Lok Sabha constituency. Ministers Patel and Tomar were involved with Chief Minister Shivraj Singh Chouhan during the road show and public meeting in Bhikangaon assembly constituency. Minister Dang took a meeting of workers and organization officials at the Khandwa BJP office and took an opinion. Minister Silavat visited Nepanagar of Burhanpur and Minister Yadav visited Pandhana along with departmental activities.