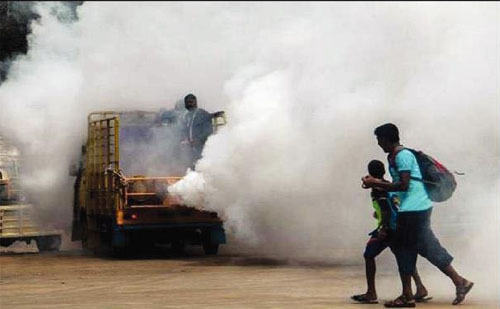 Dengue spreading to new areas in city, many districts affected
Bhopal: The number of dengue patients is increasing continuously in Bhopal. With the arrival of 6 new patients in the city in 24 hours, the number of dengue patients has reached 181. Last year till this time there were 100 dengue patients.
After finding dengue patients in the city, the survey and fogging has started. People say that neither larva survey nor fogging started in their area. By working only in the VIP area, the team made a mess in the rest.
Dengue patients are increasing rapidly in the capital Bhopal. On Sunday, 6 new dengue patients were found in the city.  At the same time, the number of Chikungunya patients has gone up to 52 with four new chikungunya patients. In the city, the team of the Malaria Department is continuously surveying the larvae and working to destroy them. A fine of Rs 1800 was imposed on 17 people in Zone-15 of the Municipal Corporation.
The work of larva survey is being done under the leadership of District Malaria Officer Akhilesh Dubey. On Saturday, the team found larvae in Zone-6 Riviera Town area and the larvae were destroyed by checking the container. The team made people aware about the measures to avoid malaria, dengue, chikungunya and the use of mosquito nets.
The District Malaria Officer appealed to the people to use mosquito nets, keep cleanliness around the house to avoid dengue, malaria. He directed the team that everyone should reach the field regularly and take action of larvae survey and destruction.

Worst hit districts
Bhopal along with Indore and Jabalpur are worst-affected by dengue. Among other dengue-affected districts are Ratlam and Mandsaur. Dengue cases are on the rise in these districts and the state. Seven districts Bhopal, Indore, Jabalpur, Ratlam, Mandsaur, Agar-Malwa and Chhindwara are worst affected. However, dengue has engulfed the entire state. Rise in dengue cases are attributed to poor sanitation. The state continues to reel under inadequate sanitary conditions and health facilities despite the rise in dengue. Garbage continues to pile up, mosquitoes breeding in stagnant water and overflowing drains remain a common sight in absence of proper sanitary arrangements.