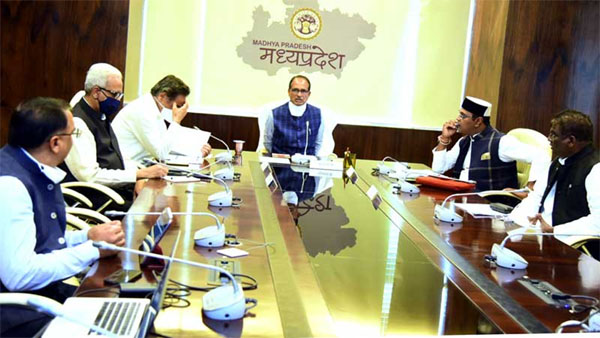 Central Chronicle Bhopal-Chief Minister Shri Shivraj Singh Chouhan has said that constant vigilance regarding Corona is necessary. Even a slight negligence can turn disastrous. Chief Minister Shri Chouhan directed to ensure mandatory use of masks in Indore and Bhopal. Shri Chouhan also gave instructions to test the persons coming to all the districts adjoining Maharashtra. Instructions were given to all district collectors in the meeting held in Mantralaya to review the situation of Corona.

In a meeting held at Mantralaya to review the situation of Corona, all district collectors were instructed to immediately convene a meeting of Crisis Management Group in their districts and take prompt decision regarding necessary precautions in view of the prevailing circumstances at the district level. Discussion on maintaining strict vigilance on movement from Indore and Bhopal to other parts of the state was also held in the meeting. In rural areas of all the districts adjoining Maharashtra, all government teams including the Rural Development Department should start campaign on activities like prevention of Corona and Roko-Toko.

Vigilance is must in Shivratri fairs

Chief Minister Shri Chouhan has said that vigilance and awareness is must during the fairs held in the state on the occasion of Shivratri. Mandatory testing of RT PCR should also be considered for participation in the fairs held in districts adjoining Maharashtra. Chief Minister Shri Chouhan said that a large number of people from Maharashtra attend the fairs held at Chhindwara and Betul on the occasion of Shivaratri. Crisis Management Groups of the concerned districts should hold meetings to take timely decisions regarding organizing the fairs and necessary precautions.

Madhya Pradesh in the 9th position

Additional Chief Secretary Shri Mohammad Suleman said that the state is showing an increase in the number of Corona positive cases since last week. In the last seven days, 110 cases are coming daily in Indore, 57 in Bhopal and 12 cases in Jabalpur. During this period, 773 cases have been reported, 397 in Bhopal and 85 in Jabalpur. The cases are also increasing in Betul, Chhindwara, Barwani, Damoh, Sidhi, Ratlam and Khargone.

All 354 passengers from Britain were tested

In view of the impact of Corona’s new strain in Britain, all 354 passengers from the Britain were tested in the state. Five of these passengers were found positive, including two from Indore and one each from Bhopal, Gwalior, Jabalpur.

Madhya Pradesh second in the country in Covid vaccination

Madhya Pradesh is second in the country in Covid vaccination. Additional Chief Secretary Health informed that 75 percent target has been achieved in the joint vaccination of health workers and front line workers. In Rajasthan the target is 76 percent. The national average in vaccination is 53 percent, while more than 75 percent vaccination has been done in 37 districts of the state. In Dindori 93 percent have been vaccinated, Bhind 89 percent, Alirajpur, Sehore and Chhatarpur 87 percent.

Chief Minister Shri Chouhan directed to speed up vaccination of health workers and front line workers. At present, 66 percent vaccinations have been done in Gwalior and Indore and 65 percent in Datia, which is the lowest in the state. So far 72 percent of the targeted group has been vaccinated in Bhopal.

Second round of vaccination will be completed by March 10

It was informed in the meeting that the second round of vaccination for eligible beneficiaries is starting in the state. It will be completed by March 10.