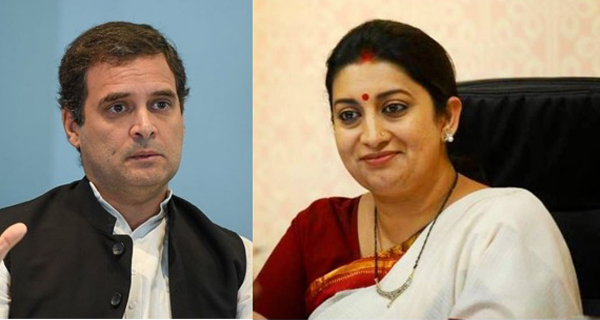 The Uttar Pradesh Congress on Monday alleged that to hide her failure, Union Minister and Amethi MP Smriti Irani was causing obstructions in the distribution of relief material sent by former Congress president Rahul Gandhi for the people of the district.

The grand-old-party has alleged that Mr Gandhi had sent six trucks of wheat, five trucks of rice, 16,400 ration packets, 70,000 masks, 20,000 sanitisers and 20,000 soaps for the people of Amethi which the Congress workers are distributing with full dedication.

Congress alleged that Mr Gandhi's initiative is being appreciated by Amethi's people and the media which is unacceptable to Ms Irani and the administration. The BJP MP, who has been unsuccessful in hiding her failure, is now creating administrative pressure to raid Congress office and harass party-persons. Party's state unit president Ajay Kumar Lallu said that the Congress has a family-like relationship with Amethi. In this period of epidemic, Congress family is serving the needy people day and night. Party district president Pradeep Singhal is engaged in relief material distribution with full force.

The people of Amethi are praising Mr Gandhi while the media has also appreciated the same which has worried the BJP and it is taking action in a spirit of malice while raiding the office of the party by showing pride of power, he alleged. He alleged that Ms Irani is disturbing the distribution of relief material by misusing government machinery. The Amethi ADM questioned Congress district president, the party office was raided despite being closed while the office's watchman was threatened.

This brings out the frustration of the BJP and Ms Irani. Congress denounces this strongly. No one can stop from providing relief to the poor people. Amethi public will surely give back an answer to the BJP government and Ms Irani.