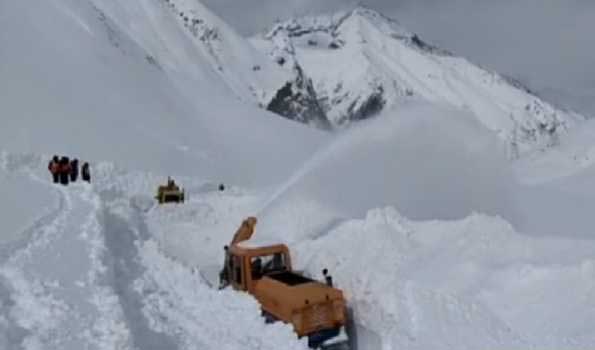 Srinagar, Snow clearance operation has been completed on record time while repair work has been initiated on the Srinagar-Leh National Highway, which remained closed for the past about three months due to accumulation of about ten to 12 feet of snow and avalanche threat.Despite major improvement in weather, only one-way traffic will continue on national highway, the all weather road connecting Kashmir valley with the rest of the country, and today, vehicles will ply from Srinagar to Jammu.The historic 86-km-long Mughal and Anantnag-Kishtwar roads remained closed due to accumulation of snow for the past about three months.Official sources said that snow clearance operation has been completed on 434-km-long Srinagar-Leh national highway from Sonamarg in central Kashmir district of Ganderbal to zero point on the Zojila top.They said the Border Roads Organisation (BRO) pressed into service sophisticated snow cutters and other machines besides men to clear the snow on the road. 'The operation was completed in a record 18 days,' they said.

They said the Beacon will now carry out repair and maintenance work on the road to make it motorable. 'Once the repair work is done, the road will be thrown open for traffic likely at the end of this month,' they added.The snow clearance operation was started a month earlier this year due to good weather on the highway, the only road connecting Union Territory (UT) of Ladakh with Kashmir.The sources further said that special checkpoint will be established to keep a tab on people coming into Kashmir valley from Ladakh and vice versa in view of coronavirus scare.The Centre has already approved construction of two tunnels at Gagangeer and Zojila to make the Srinagar-Leh highway all weather road. The historic Mughal road, linking Shopian in south Kashmir with Rajouri and Poonch in Jammu region, remained closed due to accumulation of huge snow on the highway, particularly Pir-ki-Gali. There are also threat of avalanches on the road, which is seen as alternative to Srinagar-Jammu highway. The Anantnag to Kishtwar road also remained closed due to snow accumulation.