Sonia Gandhi talks about 'lack of cohesion', asks for 'discipline', as party looks towards launching a membership drive 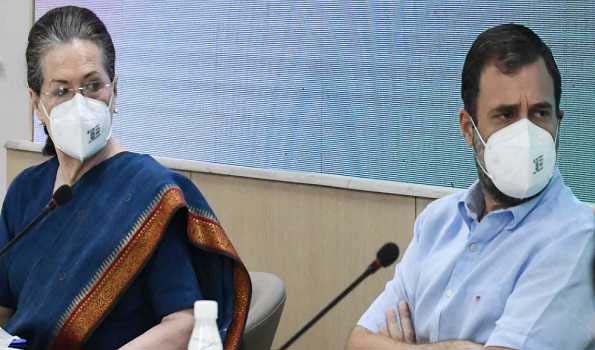 New Delhi, Oct 26 (UNI) There is a lack of clarity and cohesion in the Congress, party president Sonia Gandhi said on Tuesday as she once again called for 'discipline' in the party as she chaired a 'follow-up' meeting after the recently held Congress Working Committee meet.

Chairing a meeting of general secretaries, state chiefs and in-charges, the party president talked about the membership drive which is set to be launched by the party, and also talked about messages being given from the top not percolating to the ground level workers of the party.

"I would like to re-emphasise the paramount need for discipline and unity. What should matter to each and every one of us is the strengthening of the organisation. This must override personal ambitions. In this lies both collective and individual success," Gandhi said in her opening remarks at the meeting held at the party headquarters.

Asked about the remarks, party spokesperson Randeep Singh Surjewala said it was not aimed at any individual or group.

"It's not for a person or group. Even if someone is against us, we will fight for them, and we should not break that discipline. It's important we speak in the same voice. That's her advice," Surjewala explained.

Sonia Gandhi, while calling for a fight against the ideology of BJP and RSS, expressed unhappiness at the fact that the message being sent out from the top was not trickling down as wanted.

"The AICC releases important and detailed statements almost every day on issues facing the nation. But it is my experience that they do not percolate down to our grass root cadres at the block and district level. There are policy issues on which I find a lack of clarity and cohesion even amongst our state-level leaders," she said.

On the upcoming membership drive, Sonia Gandhi said, "new members are the "lifeblood" of any movement". She asked the PCC presidents, general secretaries and in-charges to ensure "proper printing and distribution of forms for every ward and village".

Surjewala said the membership drive would be held both in digital and physical formats.

The party also announced a mass outreach program, the first phase of which would be implemented from November 14-29.

Party leaders would hold protests, public meetings and rallies to talk about issues including economic situation, unemployment, farmers' protests among others.

Calling for training of party workers to counter the "BJP/RSS propaganda", the Congress president said focus on the groups worst-affected by government policies, like farmers, unemployed youth, and small and medium businesses.

"We must redouble our fight for those who are the victims of this government’s worst excesses: our farmers and farm labourers, our youth fighting for jobs and opportunities, small and medium scale businesses, our brothers, our sisters with particular focus on the deprived," she said.

"To make this promise truly meaningful, we must also make our organisation more representative of these cross-section of society," she added.

She also said that in the upcoming elections, campaign should be finalised after widespread consultations with all stakeholders.

"Five states are going to the elections in the coming months. Congress party workers and leaders in these states are gearing up to take on these battles. Our campaign must be founded upon concrete policies and programmes emanating from widespread discussions with all sections of society," she added.