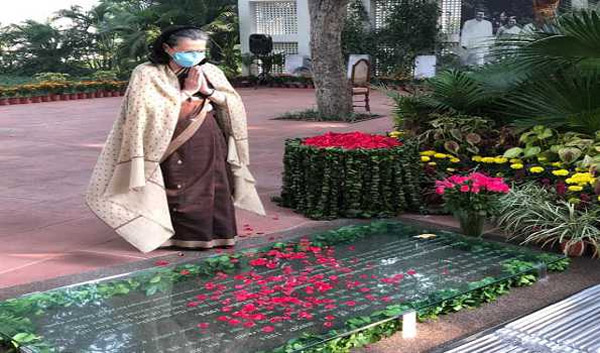 New Delhi, Oct 31 (UNI) Congress president Sonia Gandhi and party leader Priyanka Gandhi Vadra on Saturday paid tribute to the former Prime Minister Indira Gandhi on her 36th death anniversary.
Ms Gandhi and Ms Vadra visited the Indira Gandhi Memorial and paid tribute, while Ms Vadra also visited the Shakti Sthal and paid floral tributes on her matrydom day at former PM's memorial along the banks of the river Yamuna.
In her message Priyanka said, ' today is the anniversary of Mahirishi Valmiki who wrote the Ramayana and also the martyrdom day of my grand mother Indira Gandhi.'
'My grand mother introduced me to the teachings of Mahirishi Valmiki. Maharishi Valmiki's teachings inspire me to raise the voice of the part of the society who are left behind and also to support them in the fight for their justice,' Vadra said taking to twitter.
Congress MP Rahul Gandhi also remembered Indira Gandhi on her death anniversary. ' 'asato m? sadgamaya,: tamaso m? jyotirgamaya,: m?tyor m?'m?ta? gamaya'. From the false to truth. From darkness to light. From death to life. Thank you Dadi for showing me what it means to live these words,' read his message.
Along with the tweet, the Congress leader also posted a photo of the former prime minister.
Indira Gandhi was assassinated by her bodyguards in the national capital on October 31, 1984.