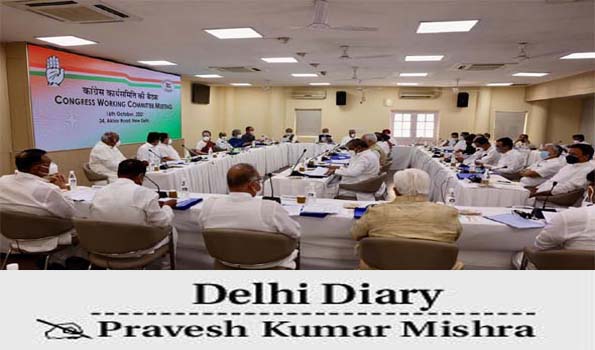 Pravesh Kumar Mishra
Group G23, a dissident group present inside the Congress, was forced to peep sideways at an important meeting of the Congress Working Committee. The subject on which G23 was trying to put pressure on it was already prepared by the party strategists. It is being said that the leaders who had made up their mind to protest came on the back foot after the strict manner in which Congress President Sonia Gandhi started speaking inside the meeting. After this, many relatively young leaders present in the meeting launched a fierce attack against Group 23. Many leaders have even said that those who are openly opposing the party's leader and his style of work by staying in the Congress party, they are working to benefit the BJP and Prime Minister Narendra Modi in one way or the other. However, sensing the atmosphere, the Group 23 leaders were also forced to bear the rhetoric running on them and in the end tried to maintain the commitment to the party by expressing confidence in the party leadership in some form or the other.

Rahul is the only option
All the senior leaders of the Congress party have once again expressed their confidence in former President Rahul Gandhi and urged him to take over as the President. Some called Rahul Gandhi the property of the party, while some called Rahul Gandhi the fighting face of the opposition group. Many party leaders pressured him to make an immediate announcement by accepting the post of president in the party working committee meeting itself. Even on social media, by presenting Rahul Gandhi as the last option, party leaders also presented their commitment to him.

Mamata's Mission 50 ready
West Bengal Chief Minister Mamata Banerjee is busy doing multiplication these days about her future in central politics. She has set a target of getting 50 Lok Sabha seats in the 2024 Lok Sabha elections so that she can play a key role in the formation of a non-BJP government, as her charisma is only in 42 Lok Sabha seats in the state. Considering that it is confined to Bengal, this goal of his is quite big. She wants to polarize the state like Modi did in the 2014 and 2019 elections. This time their strategists are giving a new slogan to woo the people 'You people vote for me because I, the daughter of Bengal, can become the prime minister.' The TMC strategists are trying to replace the Congress in the North-East states. Where there are total 22 seats. She has already brought senior Congress leader Sushmita Dev into the party and sent her to the Rajya Sabha to influence voters in Assam and Tripura. She is also strategizing to get some seats in Odisha, Jharkhand and Bihar and also making strategic arrangements for those states where the number of Bengali voters is very high.

BJP leaders may join Cong in Uttarakhand
Sensing the increasing tendency of the common people towards the Congress in the upcoming assembly elections in Uttarakhand, many MLAs, ministers and senior leaders of the ruling BJP have started switching over to Congress. In this sequence, in the past, the state's cabinet minister Yashpal Arya and his MLA son Sanjeev Arya have created curiosity in the politics of the state by joining the Congress. It is being told that about half a dozen senior BJP and BSP leaders are lobbying to join hands with the Congress.