Speaker did not follow procedure during confidence motion: Narayanasamy 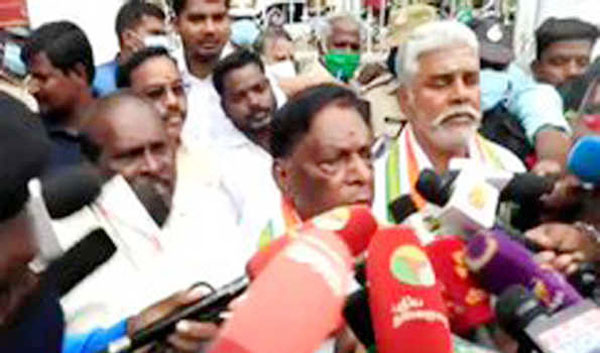 Puducherry, Feb 22 (UNI) Puducherry chief minister V Narayanasmay who tendered his resignation earlier in the day on Monday charged that speaker Sivakolunthu did not follow the guidelines in the confidence motion moved by him in the territorial assembly.

Talking to news persons, Narayanasamy said that he moved the motion and addressed the house, government whip Anantharaman posed a question to the speaker whether the three nominated members got voting right. He said when the nominated members could not vote in the president's election, they also could not take part in the confidence vote. Narayanasamy said since, speaker did not accept this, stating that he is going to the Raj Nivas to resign his post, they walked out of the house.

However, after they went out speaker announced that the confidence vote sought by him was defeated, Narayanasamy said adding that this was not as per proper guidelines. He should have sent the motion for voting. Even if, the treasury bench was absent, the speaker should have counted the strength of the opposition voting against the motion and then announced that the motion was defeated. The speaker announcing that the confidence motion was defeated was not proper, he added. This is a legal issue and legal experts are being consulted, he added.

Mr.Narayanasmay said that the BJP, N R Congress and AIADMK were indulging in efforts to topple the government for the last four and a half years by ‘Purchasing” legislators which was thwarted by the government.