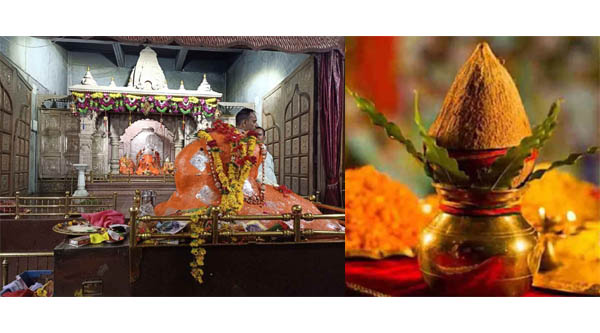 = Gudi Padwa, Chaitra Navratri, Chetty Moon today
Chronicle Reporter, Bhopal
Maa Chamunda Durbar's priest Guru Pandit Ramjeevan Dubey and Jyotishacharya Vinod Rawat informed that today Chaiti Navratri will be started with Anand Nav Samvatsar, on Chaitra Shukla Paksha Gunipadva Pratipada Ekam.
The incarnation day of Lord Jhulelal will be celebrated as the festival of Chatichand. The Sun's entry into Aries will be at 2:32 PM today. Equinox Sankranti Nav Samvatsar Yoga of a single day is being formed after almost 90 years. Chaitra Shukla Pratipada, a follower of Hinduism, celebrates the Navsanvatsar i.e. New Year. It is believed that the creation of the world began on this day, when Samvat 2078 will be known as Rakshasa. Whereas in the calculation of the name according to Samvatsar, joy comes after Pramadi Samvatsar and after it is Rakshasa Samvatsar. Mangal will be the king and minister of Samvatsar. Due to Tuesday, there will be a recitation of Sundarkand, Hanuman Chalisa in Hanuman temples. Navratri will be considered as the ninth day. New Year will be started from Pujapath.
This time Chaitra Navratri is starting on Tuesday i.e today. Nine days of Navratri is considered very special to do worship of Mother Adishakti. Navaratri is worshiped for nine days in nine forms of mother, Shailputri Mata, Brahmacharini, Chandraghanta, Kushmanda, Skandamata, Katyayani, Kalratri, Mahagauri and Maa Siddhidatri. Worshiping the forms of Maa Durga in Navratri eliminates all the sufferings of the devotees and brings prosperity in their lives. This time on the first day of Navratri, special yoga is being formed due to the position of the planets. Know what yoga is and what is Ghatasthapana Muhurta in Navaratri.
Ghatasthapana will be done today during the worship of Navratri. Ghatasthapana Muhurat - 13 April 2021 day will be from 5: 28 minutes on Tuesday morning to 10: 14 minutes in the morning.
= Yogas formed on the first day
According to astrology, this time on the first day of Navratri, some special yoga is being created by the combination of planets. On this day, Karan bav yoga will be held for 10 to 17 minutes. With this, on the date of Chaitra Pratipada, after 3 in the afternoon, Vishukhumbha Yoga will remain for 3 to 16 minutes, after which Preity Yoga will begin. So there will be Balava Yoga at 11 o'clock at night for 31 minutes.