Special precautions to be taken against Covid in Bhopal, Indore 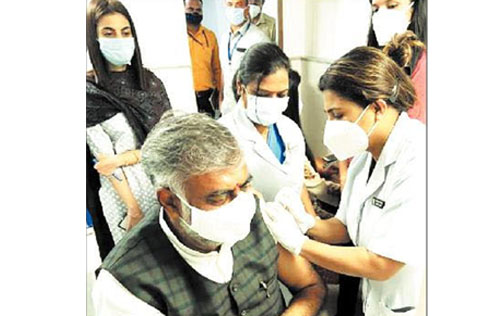 Chronicle Reporter, Bhopal-With Corona cases surfacing once again, Chief Minister Shivraj Singh Chouhan held a review meeting with ministers and senior officers. Chouhan directed to take preventive measures against Corona, especially in districts adjoining Maharashtra. He expressed concern over the possibility that the infection could be spread to the border districts of the state due to influx of people from the neighboring state. He directed to ensure the use of face masks, sanitizers and impose check on organizing fairs and other events.

Number of programmes  should be limited

It was informed in the meeting that normally, more than one lakh devotees gather on the Mahashivratri festival in Ujjain, whose estimated number will be 20 to 25 thousand this year. Instructions have been given at other places also to limit the number of people in religious events and not to organize events on a large scale.

Chief Minister Chouhan sought information about some of the cases of Corona which surfaced this week in Chhindwara and Betul districts and gave instructions to the concerned collector through video conference to take necessary precautions.

Chief Minister Chouhan also held discussion with senior administrative officials authorized for various districts and divisions and sought information. Principal Secretary Faiz Ahmed Kidwai gave information about Bhopal, Principal Secretary Sanjay Shukla about Ujjain and Additional Chief Secretary Home Dr. Rajesh Rajaura gave information about Corona cases that have surfaced in various border districts and also informed about te preventive measures being taken.
Roko-Toko Abhiyan must continue
Chief Minister Chouhan said that 90 and 156 cases have been reported today in Bhopal and Indore respectively. In view of this, all precautions should be taken. Along with this, it is necessary to take precautions in other cities as well. The citizens themselves should be alert and the Roko-Toko campaign must be continued by the administration as well. This awareness will check the spread of the disease and the situation that is gradually normalizing after being exposed to the virus in the last 11 months, will be maintained.
CM seeks information about vaccination work
On this occasion, Chief Minister Chouhan also sought detailed information about the vaccination work. Additional Chief Secretary Suleman said that the vaccine is being administered free of cost in government hospitals. In the priority groups, the prescribed category is being vaccinated first. Apart from this, vaccination is being done in private hospitals also on a minimal charge. The state is expected to acquire one crore 60 lakh vaccines in the month of March. Accordingly, the vaccine will be administered to the citizens according to the priority groups and fixed criteria.

Madhya Pradesh is ahead in vaccination