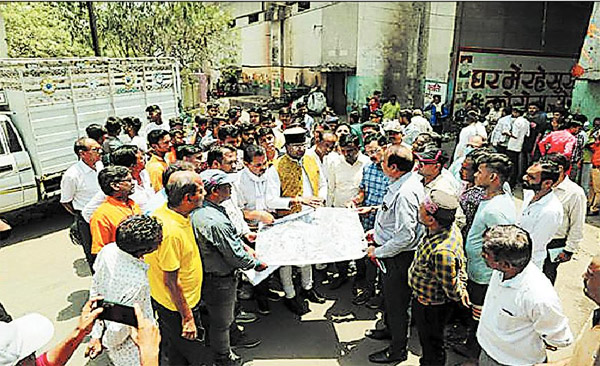 Chronicle Reporter, Bhopal
Medical Education Minister Shri Vishwas Kailash Sarang inspected Bharat Talkies Railway Over Bridge in Bhopal city today. He said that the Bharat Talkies Railway Over Bridge in Bhopal city, connecting the bus station and the old city to the railway station platform number one was constructed in the year 1974. Now with the special repair work of the bridge, it will be ready again for the next about 25 years. About two and half to three crore will be spent on the repair work of the bridge.
Minister Shri Sarang informed that due to the repair work of the bridge, changes will be made in the traffic system for a short time. According to the planning of the district administration and the traffic police, a well-organised plan is being prepared to divert the traffic, so that the traffic remains smooth. He told that the traffic system has become smooth through 80 Feet Road of Ashoka Garden and Subhash Nagar ROB. The removal of encroachments of the underpass near Barkhedi will also facilitate traffic.

Godown built under bridge to be vacated
Minister Shri Sarang gave instructions to vacate the godown built under Bharat Talkies ROB. He said that the encroached areas should be freed within two days.
It is noteworthy that since the bridge is quite old, the bearings and pedestals of the bridge have been damaged and the riding condition is also bad. Keeping in view the situation, the work of all bearings and pedestals of the bridge will be done. Also, to fix the riding surface, the existing surface will be dismantled and the new surface mastic will be made of asphalt. Maintenance of the expansion joint will also be done. Apart from this, a new surface is proposed to be made by removing the paving blocks on the pavement. Work order has been issued for this work. Eight months have been fixed for completion of the work.
Minister Sarang also said that necessary action should be taken regarding removal of encroachment obstructing the construction of ROB at Barkhedi railway gate near Aishbagh Stadium and removal of encroachment of Moti Nagar in the third leg to be constructed on Subhash Nagar ROB.