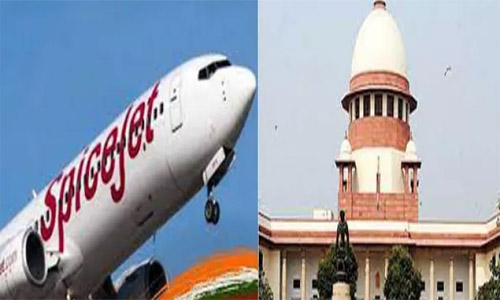 New Delhi, Jan 28 (UNI) The Supreme Court on Friday stayed for three weeks a Madras High Court order directing winding up proceedings against SpiceJet after the airline said it was looking to settle dispute over its outstanding dues with Credit Suisse. The budget airline now has 21 days to settle the dispute over maintenance fees. During the hearing, the court asked Salve: "You want to run or close the show? Better why don't you produce your financial status? This isn't the way you can run your airlines. What is your contribution?" "We are staying for 3 weeks, the High Court's (Madras) winding up order against SpiceJet," a three-judge bench headed by Chief Justice NV Ramana said, and adjourned the matter till mid February. The Madras High Court had in its order dismissed SpiceIet's appeal against the admission of its winding up on the Swiss financial services bellwether Credit Suisse's petition earlier this month. The SpiceJet had knocked on the top court's door challenging the high court order dismissing its appeal. SpiceJet's senior lawyer, Harish Salve told the Supreme Court the airline will attempt to resolve the issues with Credit Suisse in three weeks. "But it is a serious matter, if they (SpiceJet) don't want to run airlines we will declare insolvent & go for liquidation. Let us see," the CJI Ramana said.