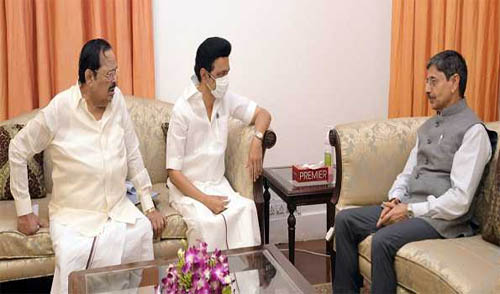 Kovind, the Bill passed by the State Assembly seeking to permanently exempt Tamil Nadu from the purview of NEET in admissions to UG medical courses.

Mr Stalin, accompanied by senior Ministers, called on Mr Ravi at the Raj Bhavan and urged him to forward the Bill to Mr Kovind to
get his assent immediately.

The State Assembly had passed the Bill in September this year to provide admission to UG medical courses in the State on the basis
of marks obtained in Plus-2 board exams as has been done before 2017, when NEET was introduced as per the Supreme Court order.

The Bill was introduced in the State Assembly by Mr Stalin on September 13 following a recommendation made by the high-level
committee headed by retired High Court Judge Justice A.K.Rajan  and it was passed by voice vote.

While moving the Bill, which will also provide 7.5 per cent reservation in medical colleges for students who had studied in government schools, Mr Stalin said it was the DMK regime headed by Mr M Karunanidhi which had ensured medical admissions based on Plus-2 marks and even the AIADMK government headed by Ms J Jayalalithaa did not allow NEET in the state.

It was during the regime of Mr Palaniswami as the Chief Minister the NEET was introduced in the State and the deaths of several medical aspirants had happened.

While blaming the previous AIADMK regime for failing to get the President's nod for the Bill passed in the Assembly on NEET, he
said the DMK after coming to power has taken to steps for scrapping the NEET and his government has been taking effective
steps to ensure that admissions for MBBS courses were made based on Plus-two marks.